Analysis of Africa by Maya Angelou 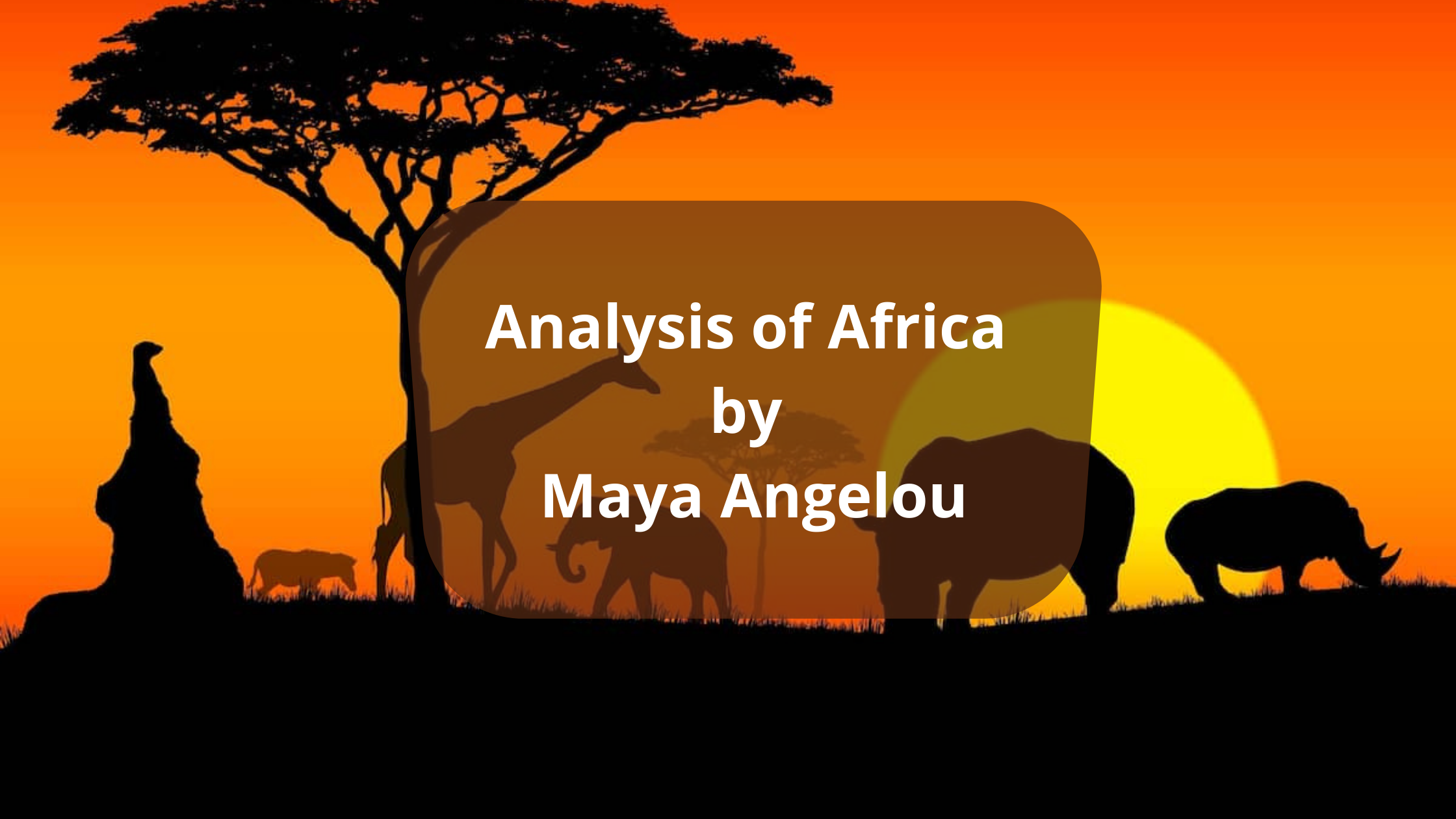 In this article, we will be discussing the Analysis of Africa by Maya Angelou which consists of About the poem, a comprehensive stanza by stanza analysis, the themes in the poem, the tone of the poem, the figures of speech, and themes used in the poem.

About the Poem ‘Africa’ by Maya Angelou

Maya Angelou’s poem ‘Africa’ is a poem about the continent of Africa, just as the title suggests. It is a poem of three stanzas, consisting of two sets of eight lines and a set of nine. The poem has an irregular rhyme pattern, as the poet portrays different, yet coherent ideas in each stanza. Maya, in her poem “Africa”, makes use of extended metaphor, as the word ‘woman’ is used to represent Africa; the poet draws the image of Africa as that of a beautiful woman.

Stanza by Stanza Analysis of Africa by Maya Angelou

In the first stanza, the poet describes Africa, employing personification as the continent of Africa is directly compared to a woman lying down, sweet as sugarcane, her hair symbolizing the deserts and her feet golden. Further description is made as her breasts are referred to as the mountains and her tears the Niles that split into two. The poet in each description refers to the continent of Africa, and its actual description. Just like the ‘sugarcanes’ represents the actual crop cultivated in Africa, the deserts in Sahara Africa, and the Nile river in Africa. Africa as described by the poet lain this beautiful, yet vulnerable and ‘black’ with the past experience of exploitation.

In the second stanza, the poet gives a recollection of the arrival of the white invaders described as ‘brigands’ otherwise known as ‘bandits’, who took her young daughters, and sold her “strong sons”. These bandits/brigands who sailed over icy cold seas, arrived in Africa, exerting violence on Africa, and taking away the people of Africa. Here, the poet recounts the colonial imperialist/European exploiters, who as described in lines 15 and 16
” churches her with Jesus”
“bled her with guns…”

Imposed a foreign religion on the Africans, enslaving and killing them, thus taking away their freedom. This Africa the poet describes, still lain, beaten to the ground by oppressors.

The Last stanza brings together the past and present, coming to a hopeful conclusion:
“Now she is rising”
Africa is rising, she will remember her pain and the losses. Africa might have suffered but she is also ‘striding’, taking a long but steady step towards a better and brighter future, though still lain.

The Tone of the Poem Africa by Maya Angelou

The tone of the poem ‘Africa’ varies from the first to the third stanza. In the first stanza, the poet employs a tone that seems to be praising Africa, exposing its beauty. However, the second stanza has a sad or low, as the poet tried to portray the pain Africa suffered in the hands of its oppressors. The concluding stanza shifts from sadness to a more resilient tone, that seems triumphant and hopeful, as Africa despite its struggles is taking steps towards a brighter future.

Metaphor refers to the direct comparison between two unlikely ideas or objects. Maya’s ‘Africa’ employed the massive use of metaphor, as seen in stanza 1 of the poem. The presence of metaphors includes:
”Deserts her hair”
“Golden her Feet”
“Mountains her breasts”
“Two Niles her tears”

This refers to giving animate attributes to inanimate things. The poet attributes the action of screaming to the continent of Africa, thus personifying Africa, in stanza 3:
“Her screams loud and vain”

In stanza three, in lines
“Churched her with Jesus”
In the above, ‘Jesus’ alludes to the Christian religion/Christianity

The themes in Africa by Maya Angelou

The major theme portrayed in the poem “Africa” by Maya Angelou is the theme of oppression of Africa by the white colonial master. The poet illustrates how the coming of the Europeans raped Africa of her pride, stepping on her face and leaving her lying on the ground. On the arrival of the Europeans, Africans were killed, enslaved, driven away from their lands, and forced to adopt a new religion and culture. Men were sold into slavery, and forced to work as slaves, and women were robbed of their right over their bodies. This theme of oppression is predominant in the works of colonial writers and Negritude writers. Maya Angelou successfully portrays the theme of oppression, as the reader is able to see a clear picture of the then oppressed Africa.

Theme of Resilience and Resistance

Alongside the theme of oppression, the poet portrays the theme of resistance and resilience of the Africans. African poets, like Maya Angelou, while exploring the past oppression and exploitation of the Africans by the European imperialist, have also illustrated Aftican’s resilience, resisting further oppression and working towards a brighter future. Africa has suffered a lot, she has been stumbled on, yet she rises again, rises above the pain and the suffering of her people, and exerting the courage and will to survive. This theme of resilence serves as the concluding theme of Maya’s “Africa” as the poet denotes:
“Now she is striding”

We’ve given a comprehensive analysis of Africa by Maya Angelou in which we looked at  About the poem, stanza by stanza analysis, the tone of the poem, themes in the poem, and the Figures of speech in the poem. We hope this article provides a better understanding and appreciation of  Maya Angelou’s “Africa”

One thought on “Analysis of Africa by Maya Angelou”