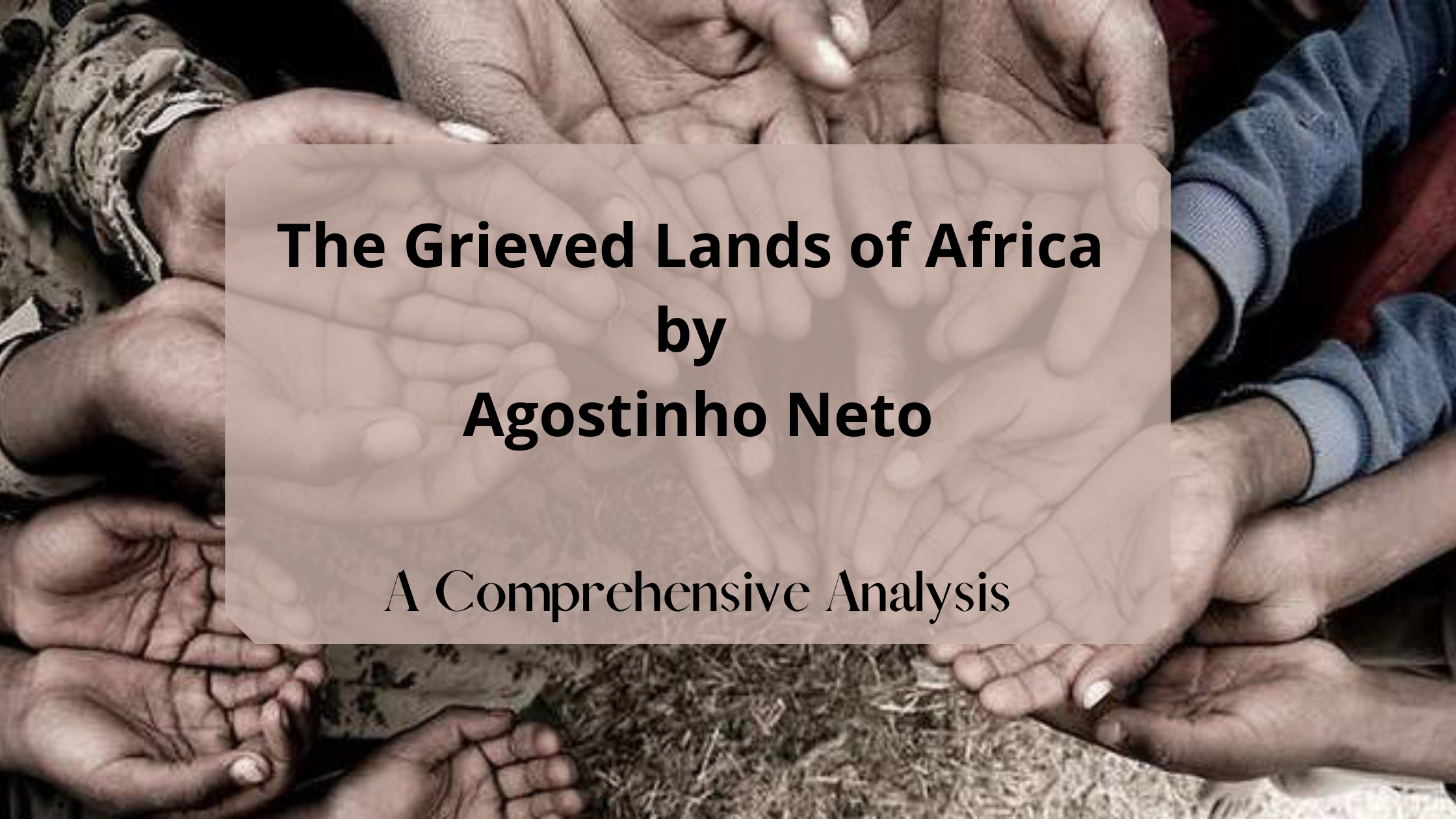 In this article, we will be discussing the Analysis of the Grieved Lands of Africa by Agostinho Neto, which consists of About the book, a comprehensive stanza by stanza analysis, the themes and the figures of speech in the poem.

Analysis of the Grieved Lands of Africa by Agostinho Neto

In considering the analysis of The Grieved Lands of Africa by Augustinho Neto, it is important to note that the poem is a protest poem, as it expresses opposition to racial injustice and colonial aggression and violence. The poem depicts the litany of the imperialist’s inhumanity against Africans. The poet illustrates the abused and exploited state of the African continent by its colonial masters.

The poem consists of 7 stanzas written in free verse. The port employs a sad mood and later optimism.

The first stanza opens with a grieving mood, as it expresses the woes of Africa in ancient and modern times. The past experiences of the slave trade have left Africa sorrowful. The experience of ancient slavery refers to the historical account of how European traders turned Africans into slaves and transported them through the transatlantic route into foreign lands, forcing them to work in plantations under bad conditions.

Whereas, the term “modern slavery”  refers to the emergence of colonization; as the Europeans took away the ruling rights of the people, subjecting them to modern-day slavery. These two forms of slavery, the poet expressed led to the degradation of Africa by the European imperialist.

In the second stanza, the poet further illustrates the story of modern slavery- colonialism. This stanza like stanza one also begins with “The grieved lands of Africa” demonstrating grief over past colonial experiences. The poet praises Africa’s culture as it is described as a ‘stunning perfume of the flower’.

This flower is however crushed in the forest by colonial masters who employed iron and fire. Iron and fire here refer to the guns and warships used to oppress and suppress the people. In extension, iron and fire might refer to the use of force and violence by the Europeans in taking the lands of Africans.

This stanza is a continuation of the tale of aggression against Africans by the colonial masters. The poet exposes a common factor of aggression “jail”: ” in the dreams soon undone in jinglings of gaoler’s keys”. Here, the poet depicts how the Europeans treated those who dared to challenge their authority; they were thrown into jail, some beaten, some killed. Also, the expression ” stifled laughter” depicts unhappiness.

The first line of this stanza signals a departure from the initial repetition of the line” The Grieved Lands of Africa”, thus a change in the mood from grief to optimism.  The expression “alive” indicates that the memory of Africa’s past experiences will always be remembered, as long as the people tell the story. The history of Africa still echoes the atrocities and inhuman acts of the European colonialist.

Stanza 5 continues from where stanza 4 ends, depicting that in the history of Africa, the African slaves thrown into the Atlantic seas aren’t forgotten. Despite this horrible experience, Africa ‘shouts out the sound of life’. “Life” symbolises freedom and independence.

In this stanza, the poet describes the aspirations of the grieved land:
“In the harmonious sound of consciences
Contained in the honest blood of men
In the strong desire of men
In the sincerity
In the pure and simple rightness of the star’s existence”.
Africa yarns for men who are sincere and pure, with good conscience, discerning from right and wrong. This is the only way Africa can heal from its past wounds, wounds from modern and ancient slavery.

This stanza begins with the expression ” they live” which indicts the desire to outlive an unpleasant past. In “Because we are living”, the poet creates an creates and inclusion, as he identifies with his Africanness. He declares that they are imperishable particles of the grieved lands of Africa, him and his African counterparts.

In conclusion, Agostinho Neto’s The Grieved Lands portrays the unpleasant past of Africa, exposing the tales of slavery and the aggressive hands of colonisation. The poem also expresses hope for a better Africa, a continent that has displayed resilience and desires to be great.

Themes in the Grieved Lands of Africa by Agostinho Neto

There are several themes in the Grieved Lands of Africa, but we will consider their major themes which are:
• Theme of colonization
• Theme of slavery
• Theme of hope

One of the major themes in The Grieved Lands is the theme of colonisation. Colonization is referred to as Modern slavery in the poem. The coming of the Europeans to Africa caused a lot of harm to the people and their culture. The poet depicts in the poem how Africa was raped of its freedom and how its cultures were downgraded.

The poet expressed how dreams and happiness were lost during the rule of European imperialism. Despite these ugly experiences, Africa beams with hope as she has outlived the evil of colonisation and working towards getting better.

The theme of slavery is depicted in the expression ” ancient slavery”. Africans were taken into slavery by white traders and were transported through the transatlantic seas to other parts of the world, where they worked in plantations under harsh conditions.

The poet illustrates Africa’s transition from the painful experience of the slave trade to modern slavery and now to a continent that has outlived its ugly experience. The poet expressed that those slaves who died in the Atlantic ocean will not be forgotten, the bad experiences will remain alive and serve as an inspiration for a better Africa.

Hope is expressed after the poem, as the poet depicts a hopeful Africa, which although has experienced inhuman treatment will be better. The poet also points out the aspirations of Africa, a continent with honest and pure men, discerning from good and bad.

The figures of speech in The Grieved Lands include metaphor, paradox, personification and onomatopoeia.

In line 3:
“In the degrading sweat of impure dance”
Here, the poet makes a comparison to slaves being tortured, thus ‘bitter dance’.
Inline 4:
“Of other seas”
Here, the poet refers to the Europeans, as one has to cross to the other side of the seas to get to their place.
In line 9:
“Crushed in the forest”
This expression refers to the destruction of African culture, as the Europeans termed African culture inferior and theirs superior, and enforced European culture on Africans.

The title of the poem “The Grieved Lands” depicts personification as land is given the attribute of ‘grief’.
In line  12:
” by the wickedness of iron snd fire”
Here, iron and fire are personified as it is said to be wicked.
Also, in the lines:
“They live/The grieved lands of Africa”
Here, the lands of Africa is said to be living, thus attributing the ability to live to an inanimate object.

This device refers to the use of words that suggest their meaning.
In lines:
“…jinglings of jailer’s keys”
The word ‘jingling’ is a word that suggests meaning through sound, thus suggesting the sound of shaking keys or bell.

We’ve given a comprehensive analysis of The Grieved Land of Africa by Agostinho Neto, in which we looked at stanza by stanza analysis, themes in the poem, and the Figures of speech in the poem. We hope this article provides a better understanding and appreciation of the poem The Grieved Lands of Africa.