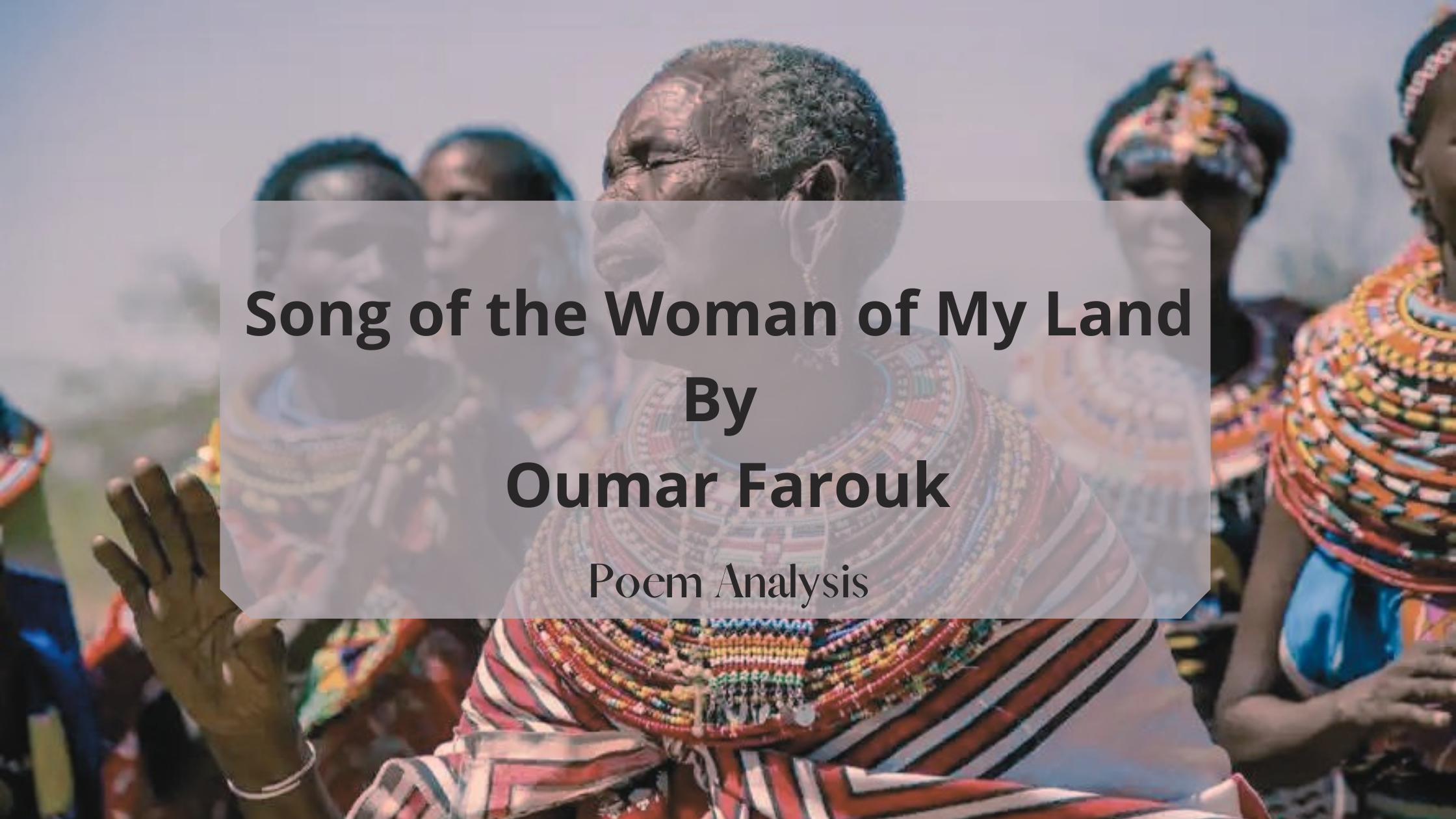 Read The Song of the Woman of My Land by Oumar Farouk Poem HERE.

The song of the Women of my Land by Oumar Faruk is a poem of forty-eight lines, that follows a free verse style. The poem is an elegy depicting regret over the lost beauty of his nation’s cultural heritage. The poet makes a comparison between African culture and the songs of women. The songs of women, he points out refer to those songs that preserve the culture of the land. The song has however disappeared, thus symbolizing Africa’s cultural heritage, which has been lost and replaced with European modernization.

The first stanza begins with a comparison, as the poet compares an idea to ‘the chipping away at a bit of wood’. The poet expresses the fading away of a memory, a memory collected in lyrical song. This song is now a fading echo. This stanza depicts African cultural heritage as a song facing away, that is why it is compared to the chipping away of wood as the sculpture carves. Time is expressed as what swallows memory, aa while time pass, the song fades away.

The second stanza exposes the kind of song mentioned in stanza one, a song ‘about their lives and a song about their past pains. This dong was sung in the field, indicating how Africans sang while working on the plantation during the slave trade. Again the poet mentions how these songs have been lost over time.

These lines depict how Africans during the Transatlantic slave trade, sang songs of anguish to relieve their pains. The poet explains that this song served as an expression of their pain, as although coming from different parts of Africa, they had a common pain and loss.

Here, the poet complains about output how the songs of the women of the land are forgotten, like the women that did in the past. These women had died but expect the song to tell the story of their past experiences. The poet here illustrates the importance of passing on stories from one generation to another.

This stanza continues to talk about the songs of the women. The zinc now roams about looking for its lyrics, thus searching for an audience to tell the story of past events. This reflects the wandering stories that have no audience, parents have refused to pass on these stories to future generations.

These two stanzas echo the same idea. The poet has decided to tell the tale of the women of the land in his poem, as his poem sings out the story of past experiences about the labour and toil of past women who had died long ago. In writing about this song in his poem, he intends to let this story live long in our memories.

Themes In the Song of the Woman of my Land

The poem explores the theme of expression as the poet depicts the oppression of the women of Africa who were carried into slavery during the Transatlantic slave trade. These women were tortured and lived unhappy lives. The stories of their past, they collected in a song, a song of grief and lament. The poet also expressed how some women died long ago following enslavement and oppression from the Europeans.

• The preservation of our culture

• The theme of the Song

The poem expresses how women had used songs to relieve their pain in the past. These women while suffering enslavement and harsh treatment, sing in a communal voice and used singing as a way of expressing and relieving their pain. These songs also helped them endure hard times. In considering the importance of song as one of the themes in The song of the Women of our Land, it is vital to refer to the importance of oral tradition. Oral tradition encourages the passing of information to generations through oral forms such as singing and storytelling. Therefore, the author tried to identify with oral tradition in his poem The Song of the Women of our Land. The poem itself is written in a lyrical form and possesses a rhythmic flow.

The figures of Speech in the Song of the Women of my Land are Simile, personification, metaphor, repetition, alliteration, etc.

This is a figure of comparison, and it compares with ‘like’ and ‘as’. In the first two lines of the poem:
“Like a sculptor chipping away a bit of wood
Time chisels away bits of memory”
In the above, the passage of time is compared to the chipping away of wood as the sculptor carves.
In lines:
“Like the women died long ago”
Here, the poet makes a comparison between being dead and forgotten; he compares how the songs of the women of his land were forgotten to the state of being dead and forgotten.

Personification involves giving animate features to inanimate objects.
In line 2
“Times chisels away bits of their memory.”
In the above, the word “time” is given the human attribute of being able to chisel.
In the lines: ‘’The stuttering lips of my pen’’
Here, the pen is given the human quality ‘to stutter ‘.
In the lines:
“Today the tune rooms to the forlorn fields”
‘tune’ is personified i.e given the ability to move about.

This is a figure of speech that shows a comparison between unrelated things by stating that one thing is another. Metaphor found in the poem :
Line 10 – When servitude cuffed the ankles of their souls
Line 16 – Cheat the tyranny of tit

Repetition occurs when a word, phrase or sentence appears more than once in a poem. Some repeated terms in the poem include: ‘’Forlorn fields,’’ ‘’servitude,’’ ‘’ploughed,’’ ‘’women of my land’’ etc.  These words were repeated to show emphasis.

Lines that show the use of alliteration include:

The mood of the poem The Song of the Women of my Land?

The mood of the poem is sad. The poet shows sympathy for the women of his land who had been tortured.

The diction of the Poem The song of the Women of my Land?

The poet employs simple language. The poet, however, employed imageries and symbolic terms to express his message.