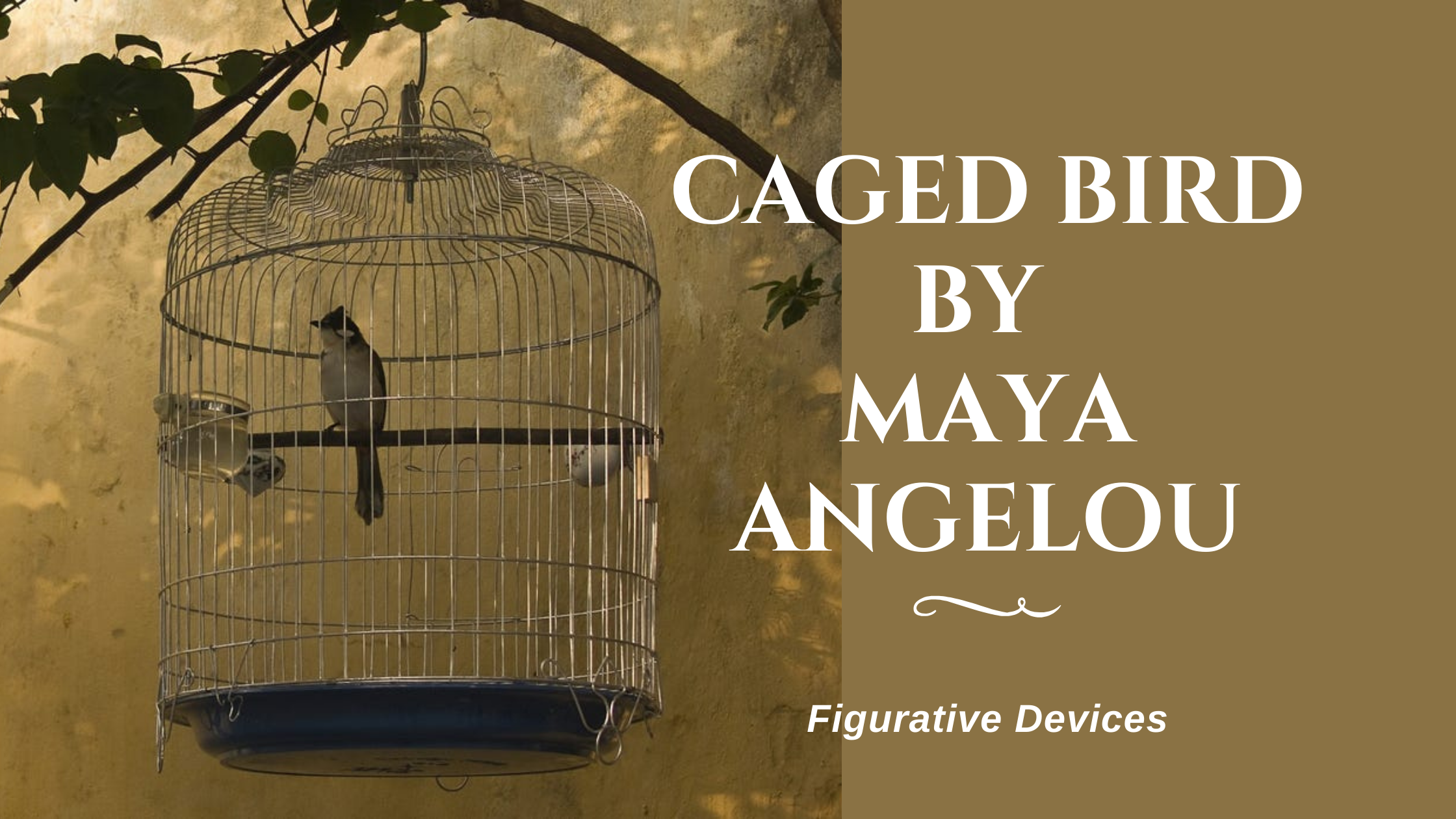 Maya Angelou’s poem deals with the harsh reality of African Americans. In “the free bird”, she describes what freedom is and, in “the caged bird”, the terrible realities being a segregating society in which one isn’t accepted.

In her juxtaposition of “the free bird” and “the caged bird”, Maya draws a distinction between what should be and what are for African-Americans Americans in a nation they consider their own.

Some of the Figurative devices used in the ‘Caged Bird’ by Maya Angelou are metaphor, personification, alliteration, repetition, symbolism, and irony.

Metaphor is used for indirect comparison. The use of metaphor is seen in the use of the words’ caged bird’ and ‘free bird’. The poet uses an extended form of metaphor to describe two types of people in the society, one the ‘free’ and the other ‘caged’. The ‘caged bird’ indirectly refers to the African American community and the ‘free bird’ to the white American society.

This figure of speech gives human attributes to inanimate objects. In lines 24 and 28, one can see the use of personification.

In the above line, the tree is given the attribute of sighing, when in the real sense, trees cant sign.

“…his shadow shouts on a nightmare scream” (line 28)

In the above line, shadows are said to shout, which is a human attribute.

This device refers to the repetition of consonant sounds in the same line. The use of alliteration is shown in:

This involves the repetition of an idea, word, line or stanza within a poem for the aim of emphasis. In the poem, stanza three is repeated in stanza six, showing emphasis on the predicament of the ‘caged bird’ and freedom as the essence of life.

This is a predominant feature in this poem. Symbolism is a figurative device used when an object is used to represent an idea. In the poem, the ‘caged bird’ is used to represent the black community in America. The word ‘cage’ represents the subjugation of the blacks and the segregated environment, which in extension refers to the black neighbourhood such as South Side Chicago. While the ‘free bird’ refers to the whites who are allowed to live anywhere, have prominent jobs and live without any form of discrimination.

There is also a scintilla of irony in this poem, the caged bird by Maya Angelou. The caged bird is heard even with his torturous condition “on distant hills”, while the free bird is not heard with all his luxuries.

The caged bird also learns to value freedom in his captivity more than the free bird who enjoys its freedom.

Lastly, one hardly expects a contrast between the caged bird and the free bird when one looks at the title.