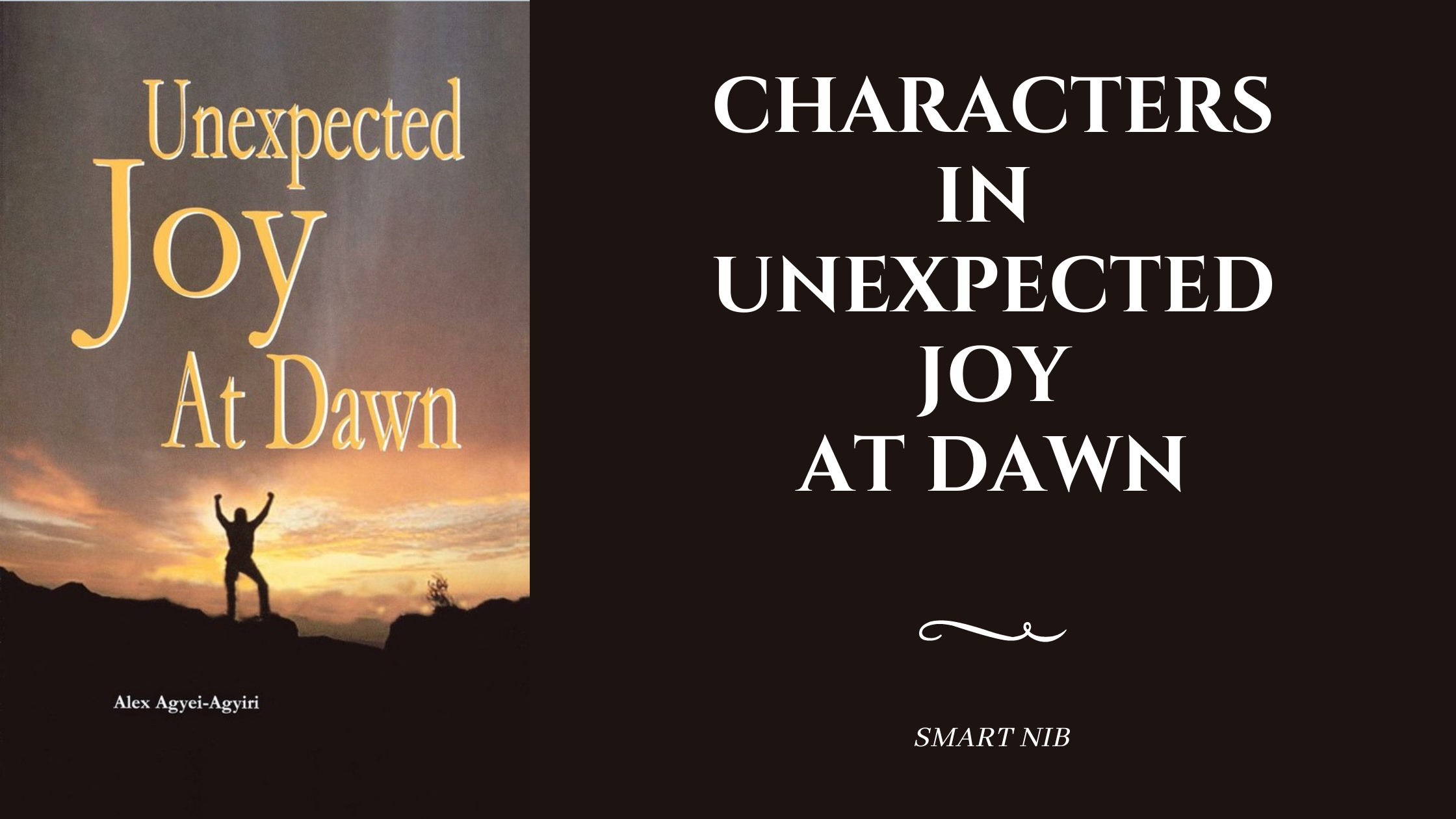 Other characters from Unexpected Joy at Dawn include Marshak (and her companions), Linda, Immigration Officer Paleo and the Proprietor of Beyees Restaurant and the proprietor of the Beyerman Complex as well as Tom Monday,

The main characters in the story, however, limit themselves only to Nii Tackie, and Mama Orojo.

Let’s take a look at these characters one by one.

(1) Moses Nii Tackie Bi Akrong Nabi is one of the two main characters that this novel centers around. Moses is Mama’s long-lost brother. While he was birthed in Ghana and was christened with to a Ghanaian identity (of Ga extraction), He is of Nigerian descent. This means he is both a Nigerian and a Ghanaian.

However, he is regarded as an exile in both of these countries. Alien in Ghana due to his Nigerian tribal markings. Alien in Nigeria due to his Ghanaian confidence and his inability to use all Nigerian languages.

(2) Mama Orojo is Nii Tackie’s Nigerian sister. She was separated from her brother after the Ghanaian expulsion of foreigners fifteen years before.

She is a hardworking woman who runs a growing business in construction and a sweets store. Evidently, she needs someone to oversee these and is an important factor in her search for her missing brother.

She has no prejudices based on ethnicity which is a reason why she is willing to marry Joe the Ghanaian. She is kind and religious. Her beauty is evidently an attraction to the hearts of men.

(3) Massa is the woman who is ill we meet in the beginning section of this text. She is suffering from a mysterious illness, which doctors believe, has her days of living being counted. Her name is Nii Tackie’s love interest and is a Pan-African. Up until her passing, she will urge Nii Tackie not to go to Nigeria.

(4) Joe is an illegal gold miner and the man who helps Mama Orojo at first after she was swindled during her gold hunt by I-Put It-To-You and then in her quest to find Nii Tackie who is a reputed acquaintance of Joe. Joe like all men is drawn to Mama Orojo’s beauty, and eventually, the two of them propose the proposal to Mama Orojo.

He wants to legitimize his mining business, which is illegal.

(5) Aaron Tsuru is a soil scientist and the founder of the Anthill Project. He is fortunate to be part of a Ghanaian society that isn’t equipped to realize the potentials of his. The man is Nii Tackie’s friend on their journey to Nigeria by committing them to servitude in order to search for Nii Tackie’s younger sister.

He dies near the of the story after he leaps off the building and flees.

(7) Tally O is the dubious person who swindles Mama Orojo with the sale of fake gold. A duplicity-prone character with multiple identities, he’s affectionately called I-Put It-To-You. In the last few days, no person knows who he is. mysterious and elusive I-Put-It To-You.

(8) Linda is Nii Tackie’s junior colleague in Expense Bank. It is also one of two bank typists. She is especially fascinated by Nii Tackie due to the fact that he has Nigerian nationality. She is banking on this as an avenue to enter Nigeria and book a trip to England to be reunited and be with her husband. She is prepared to sacrifice everything in order to reach her goal.

(9) Immigration Officer Paleo is the principal officer with the responsibility of ejecting foreigners. He is accountable for Nii Tackie’s slave at the farms. Mama Orojo will later save his infant child from the event of a fire. His wife is not so fortunate.

(10) Marshak is another name on the list of Ghanaians who were exiled from Ghana by the revolutionary government. She is one of three Ghanaian ladies Nii Tackie and his comrades get together in Nigeria. She is a prostitute in order to survive. Her mother’s life in Cote d’Ivoire is not any different.

The character of Nii Tackie’s eyes has hope of finding a marriage. She can be irritated when Nii Tackie mistakenly thinks she is Massa (his ex-loved one who died). She later dies after a brief argument over her relationship with Nii Tackie (on morality clearly) and is thought to be a suicide, a calamity Nii Tackie is responsible for.

(11) Tom Monday is a widower and businessman who hails from Illere, Nigeria. He is the old man that Mama Orojo and Ibuk paid an unintentional visit to during their mission to the evangelical church within the city. He has two kids; one of which is a 28-year-old daughter who is married to a man from the Sahm Movement.

He is fascinated with Mama’s beautiful beauty and grit. He is willing to the marriage of Mama Orojo when members of Amen Kristi do not agree to her marriage because of prejudices based on ethnicity and nationality.