Fate of a cockroach 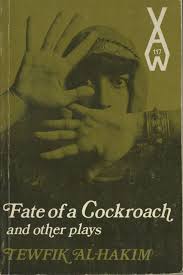 “The fate of a Cockroach” is an original three-act play by Tawfiq al-Hakim. The play is the author’s complete dissatisfaction of people of the Egyptian population and social revolution that occurred during the time. The play is a reflection of the author’s reality of life for humans. The play is controversial as on one hand al-Hakim shows cockroaches being like humans and, contrary to that, he contrasts humans with Cockroaches. It is still difficult to determine if the writer is trying to mock all the vices of population and the Egyptian people specifically or is the shining illustration of the use of absurdity into the story. The principal objective of the author is to critique his Egyptian administration and army for accurately describing the current state of the nation and the results of the culture and political life in Egypt and made the people confront the real issues.

The play by Al-Hakim Fate of a Cockroach was first published in the year 1966. Al-Hakim affirms that man is not in control over his fate as the main concept in his story. The idea that one is in control of their destiny results in a desire for the pursuit of the knowledge or power. Using his male characters, Al-Hakim attempts to depict the character of man as self-centered, arrogant and obsessed with science. The ladies in his plays represent the humble nature of nature. The characters in the play queen cockroach and Samia are depicted as self-deprecating in the course of their husband’s self-importance. In the same vein, we all are faced with the fact that we are not significant within the world as fate’s powerful force is in control.

Although the ants are regarded as less than the cockroaches as claimed by the Savant since they are only concerned with food production They are the biggest threat to the survival of the cockroach. When a cockroach falls and gets caught on its back, an ant immediately attacks and carries the carcass away to be used to be used for food. This is paradoxical because, though insects are thought of as being small in the cockroach’s world, they are shown to be crucial in determining how the life of the cockroach will turn out. Following the announcement by the Minister of the death of his son there is the queen that states that a solution to the problem of the ants needs to be found, and the King says there is no solution. In addition, the King’s role is diminished because he is unable to take on this challenge or “fulfill his formal functions”(pg.8).

In the play, as illustrated by the cockroaches. A sense of superiority prevents them from changing their ways of the ‘lesser Ants’ and, consequently maybe coming up with a solution for their dilemma. In a moment of clarity the Minister makes a suggestion to the Minister “Armies. Ants are threatening us with massive army. If we could organize ourselves and gather in large numbers, we’d find it simple to strike them by scattering them and then smash them to pieces under our feet.”(pg.9) In the immediate aftermath, the King was looking for an army, however the nature of cockroaches doesn’t permit cockroaches join in the army.

The King suffers his fate when he stumbles and falls on his back while in the bathtub as seen by Adil and Samia. Adil is fascinated by the King( Cockroach) as he observed how the cockroach fights continuously without tiring. In this book, the author discusses the concept of learning lessons about life by observing the smallest things around us. The determination of the cockroach is highlighted, as the reader gets to understand the strength and courage shown by the insect as a life lesson. He faces his fate as he drowns in the bathtub, after which the ants take him to their food supply.

The characters in the play include cockroaches and an ant representing the inhabitants of Egypt who fought with one against one another. The cockroaches declared their superiority to the ants who ruled the state. However, they are convinced that they are creatures of the human race seeking to discover the truth but are still struggling about the meaning that is life or death. Therefore, it is my duty to think about the way a cockroach could have the capacity to think and manage the nation and be the ultimate person who decides the fate of humans. The writer wanted to portray the political climate of that time and his discontent with the the authority he had, specifically president Nasser. Additionally to that, in the play insects are trying to become similar to men instead of men subdued to the lifestyle of the cockroaches. The expression “In the entire world of Cockroach there is not a cockroach who feeds on another. Everyone is looking for his daily bread” is an illustration of the human vices that are embodied by cockroaches that try to be men.

Al-Hakim also reveals a touch of satire in the culture and social structure of cockroaches that are personified, claiming to be “are not like those small creatures who gather at the slightest of pretext”. In particular, it is depicted in the beginning of the play in which the king is certain that he has the complete authority over his subjects and the queen accuses him for his lack of respect towards her. This incident reveals the futility of the cockroaches to act as humans, believing they are the most perfect creatures of the universe. The King with no clue to his mind increases his power by using his skills as well as “the length of his wickers”.

Another aspect that the author examines is the inability of cockroaches to face the obstacles and avoid their surroundings every day. The cockroach’s inability to fight is evident in the Scientist constitution which states that, “we cockroaches are the most superior creatures on the face of the Earth” yet “…we are afflicted by those lesser creatures” The cockroach’s opposition against ants bolsters the perception of vanity their deeds and actions.

If we look at the religious scenario that is depicted in the play the cockroaches’ response towards it was rather skeptical as can be seen by the queen’s remarks: “in my position with all my beauty, and elegance, can’t even take a step without trembling for fear that I might slip and fall on my back ….and quickly pray for the army of ants.” Furthermore, they think the priest’s words to be “completely incomprehensible things”.

The second scene reveals the human world who refer to cockroaches as “moving mountains” struggling in the bath that is Samiya as well as Adil. There are therefore two obvious parallels in the world of cockroaches as well as the human world , which is evident through the way the dialog between two characters is conducted in the same location and in the same manner. So, if we see the humanization of cockroaches in the initial act then the following one demonstrates that humans were compared to creatures of the cockroach. So, Al-Hakim does not leave chance for humans to improve, claiming that human behavior is increasingly like the behavior of animals.

After a summary of all these arguments leads my conclusion: al-Hakin’s remark of two distinct and similar worlds was quite efficient and rational and also highlights the fundamental connection between the way we conduct our lives with the inherent characteristics of animals. The satirical tone could be justified as the writer’s effort to draw people’s interest in the serious issues of our society. While parallelism is crucial and is a slap at humanity.