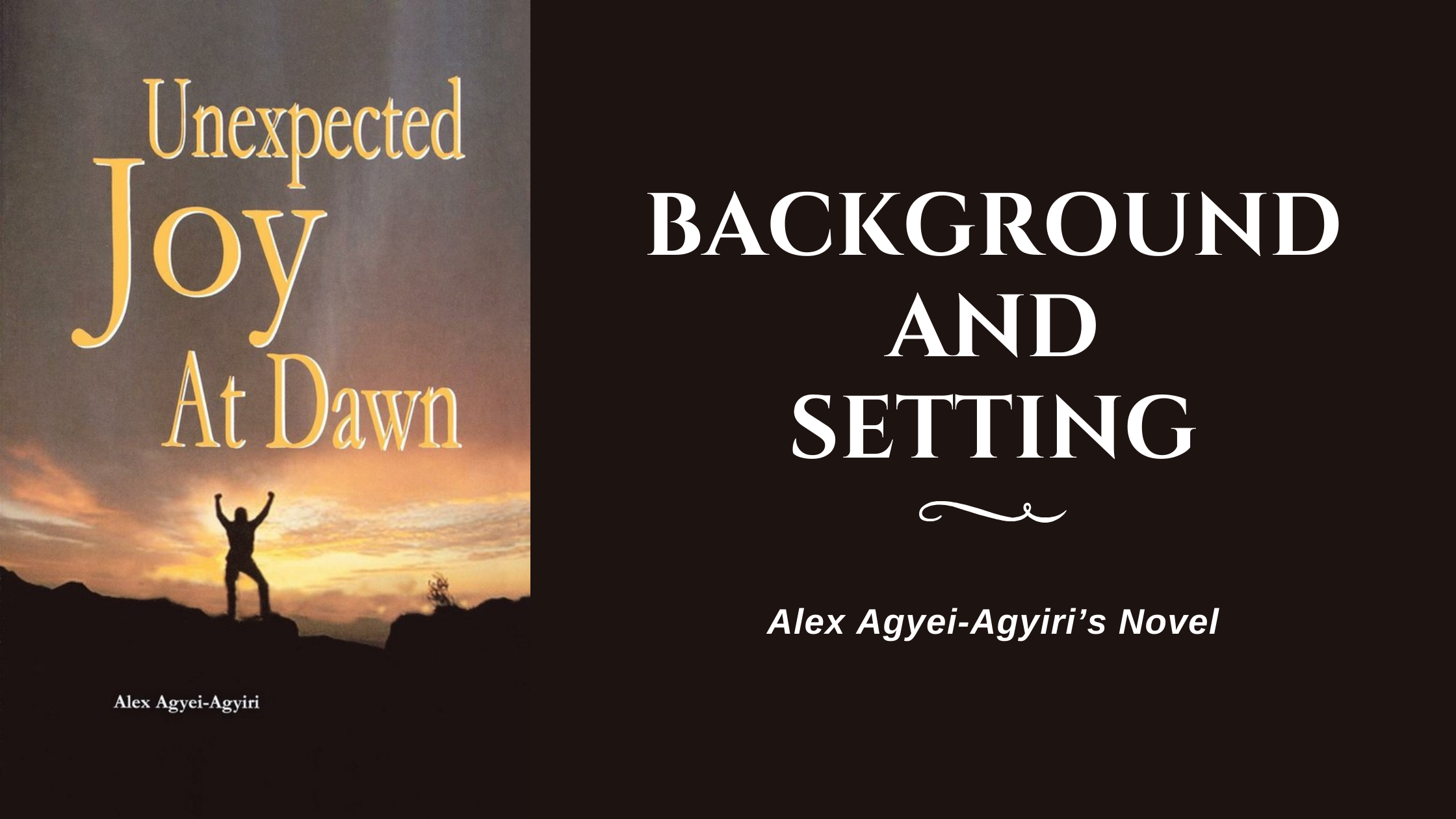 In this post, we will be discussing the Background and Settings in The Unexpected Joy at Dawn by Alex Agyei-Agyiri.

The Unexpected Joy at dawn is set within two West African countries, Nigeria and Ghana. A part of the plot in the book takes place in the suburbs in Lagos in Nigeria and the other one in Accra, Ghana. This refers to the physical location of the novel. In this article, I’m going to guide you through the events that shaped the entire novel and the reasons that prompted the creation of the novel in the first place.

As has been stated, no literary text is completely independent of context and society. Each work of fiction is in one way or another affected by the diverse circumstances in society. The Unexpected Joy of Dawn is not an exception. It could easily be categorized as a historical novel due to the fact that it is based on two major historical instances.

The first incident made its way into the news in November 1969 when the Ghanaian Premier, Kofi Abrefa Busia, coordinated the expulsion of 140,000 Nigerians from Ghana within a month of his election to the post as a politician. Ghana was in decline, and its economy was in disarray. Nigeria, on the reverse hand, was at the of a devastating civil conflict. The sloppy judgment affected the relationship between both countries in more ways than one.

Alex Agyei-Agyiri has built his novel on the foundations of this incident. Mama Orojo, with her parents, was among the exiled Nigerians and left her younger brother, Nii Tackie. The incident separated both siblings. This led to the conflict in the text that focuses on the reunion between the siblings.

Themes in Unexpected Joy At Dawn

In the setting of the context of Unexpected Joy at dawn, the Nigerian government’s imminent removal of Ghanaians raises a huge concern about Nii Tackie’s identity. Before then, Nii Tackie considered himself a Ghanaian. He was born in Ghana; he has a Ghanaian name, and that was where it was that he got his education to university. He had Ghanaian mannerisms. If it weren’t for his distinctive ethnic motifs and discrimination fueled by Nigeria’s shameful decision, he could easily have been regarded as a Ghanaian.

Therefore, he is looking for an opportunity to reunite with his sister and a country that he can call his own. But he won’t be able to find within Nigeria until the fate of destiny brings them together.

Another interesting point to the historical background of the novel lies in the revolutionary Ghanaian government. While not explicitly mentioned in the novel, Jerry John Rawlings was in charge. He was the symbol of the revolution that took place across Ghana in the era.

His government dealt with alleged opponents of the state and corrupt politicians. It punished them with prison time and executed several. It also cleansed and sanitized the Ghanaian Aegean stable. As a result of this, Marshak was forced to leave for Nigeria, where she lives in prostitution. Her mother also fled relocated to Ivory Coast to avoid what was happening to the father of their family, who was also prominent before the revolution.

It was the Rawlings administration that also retracted Cedi denomination(s) out of circulation and challenged the source of earning of certain Ghanaians. This administration refined Ghana to become the nation it is now.

Themes in Unexpected Joy At Dawn

The Unexpected Joy at Dawn has been compared to a novel set in the past because it is based on historical events, including the first expulsion in 1969 that caused the separation of Nii Tackie and Mama Orojo and the second expulsion in 1984 that joined the two siblings.

We also brought into play the Jerry Rawlings administration, which was in charge of the affairs during the time of Ghana and whose idea was the revolution that transformed Ghana.

The setting for the novel, therefore, is Nigeria, in addition to Ghana. The time period was in the 1980s, and, with the use of the flashback technique, it is set back to the 1960s in the latter half of the decade.

The social setting has created two postcolonial societies, each with its own part of economic problems and societal corruption, as well as religion-based bigotry and ethnic divide. Both countries are, though in different ways, undergoing reforms set by their respective government policies.