Plot Summary of Look Back In Anger by John Osborne 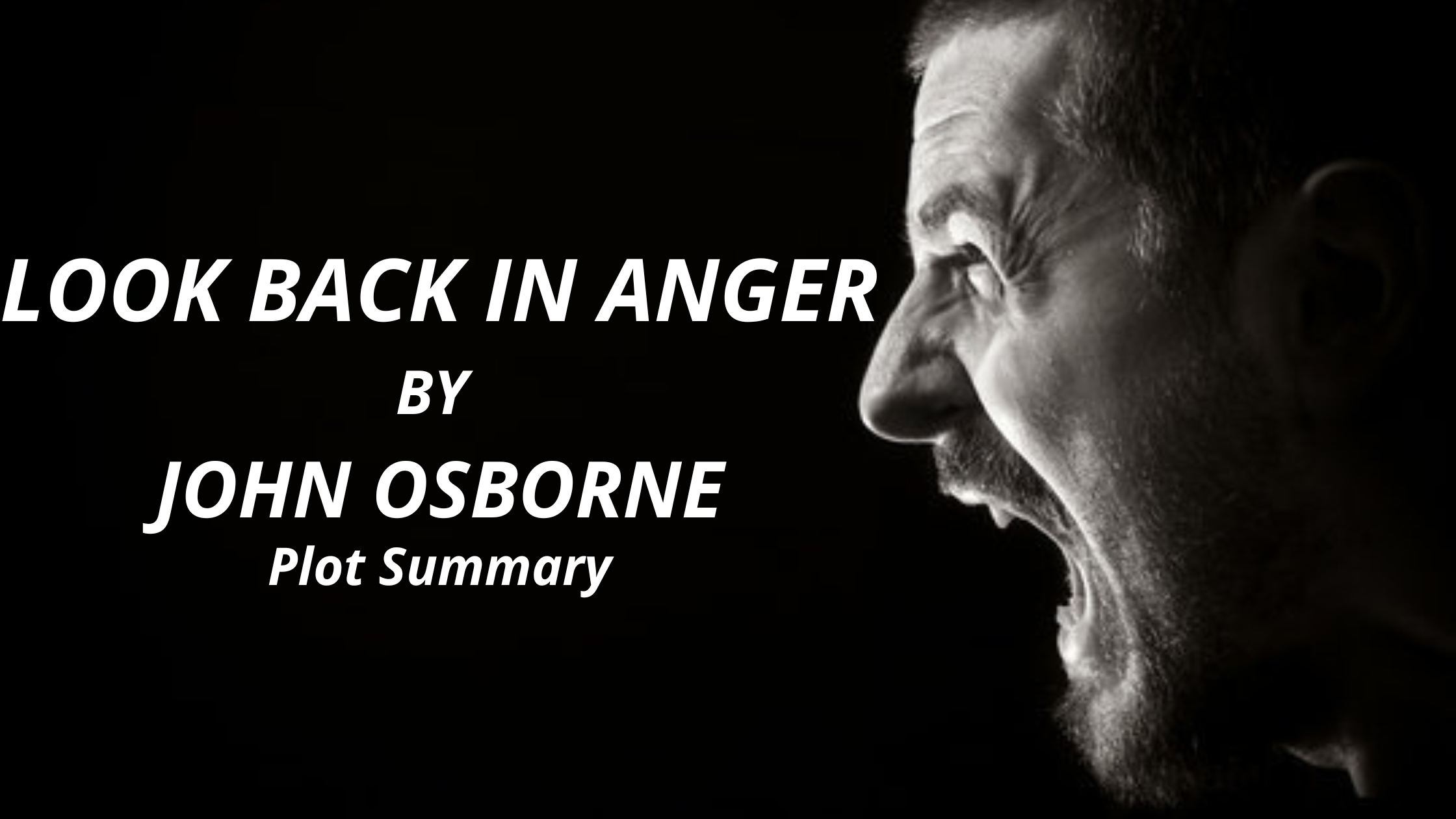 Plot Summary of Look Back In Anger by John Osborne

The play ‘Look Back In Anger’ follows a young couple, Alison and Jimmy Porter, as they try to negotiate the complexities of class and an ailing marriage in the1950s England. Alison is from a high-class background. Jimmy is from a middle-class background, but he’s well educated. The couple is housed together with Cliff Lewis, an easygoing man from the working class and Jimmy’s friend for a long time. The story begins on a Sunday morning in the living room. Alison irons her clothes as Cliff as well as Jimmy are reading the paper.

The first act of the play largely includes Jimmy’s angry outbursts against complacency in the upper classes and his wife’s inability to express “enthusiasm.” Jimmy thinks that suffering is the only way to feel emotions that are real and believes that Alison and other upper-class people are not as “alive” as he is. Jimmy also has some nostalgia for past Britain when the country enjoyed more authority. Jimmy’s attempts to provoke his wife with a show of emotion intensify when the situation gets worse.

He is a snarky jerk and complains that women everywhere are trying to demolish men. Cliff is trying to encourage Jimmy up and starts to chat and scuffle with his friend. They fall over Alison’s ironing board and she is burned in the arm. Jimmy apologizes however she demands Jimmy to leave and he walks away.

Cliff helps Alison take care of the burn and she also reveals to him that she’s pregnant with Jimmy’s child. She hasn’t revealed the news to Jimmy until now, since she’s afraid that he’ll be frightened and angered. Cliff calms Alison and assures her that Jimmy is in love with her. He kisses her. Jimmy arrives while they’re kissing but does not say anything or even object (the three are in a unique set-up which would be shocking to viewers that day).

After a while, Cliff leaves to get cigarettes as Alison and Jimmy have a romantic moment. The two play the ” bear and squirrel” game which lets them play with affection as they pretend to appear as animals. Then Cliff comes back and tells Jimmy they know that Helena Charles, one of Alison’s friends from the upper classes is calling. Jimmy’s mood immediately turns dark. When Alison states that Helena would like to stay together, Jimmy explodes. Jimmy says that he would like Alison had a child who would die so she would experience the true pain.

The second act opens by having Helena and Alison taking on the female duties of their home. Jimmy is playing the trumpet off-stage. Alison talks to Helena about the story of her initial time with Jimmy. They lived together with Jimmy’s friends from the working class, Hugh Tanner, and went on “raids” to parties of Alison’s friends from the upper classes. She claims that she felt “a hostage from those sections of society they had declared war on.”

Helena inquires about the reason they were married in the first place, and Alison states that it appeared to be mostly due to her mother as well as her dad Colonel Redfern was not happy with it. This led to Jimmy deciding to marry her, no regardless of what.

Jimmy and Cliff are in the kitchen eating. When Jimmy learns that Helena and Alison are attending church later the next day, he is convinced that Helena is trying to get Alison and take her away. He hurls a string of scathing remarks about Alison’s mother.

Helena attempts but fails to argue with Jimmy, and Jimmy asks her if she’s seen anyone die. Jimmy recounts his experience of his father’s death from injuries sustained during the Spanish Civil war when he was just ten years old and claims that it gave him more knowledge in life than Helena and Alison have ever learned. At the end of the scene, Jimmy leaves to go take the phone. When he’s gone Helena informs Alison that she’s sent an email to Colonel Redfern requesting for him to call Alison up. Alison doesn’t protest.

When Jimmy comes back, he informs her that Hugh’s mom who is a woman of the working class who put the candy shop and to whom he feels a great affection is suffering from a stroke. He requests Alison to go to the hospital along with him. Instead, she heads to church. Jimmy is left to himself on the stage.

In the following scene, Colonel Redfern helps Alison move out. Redfern reveals that he believes Alison’s mother and he was too agitated by her marriage to Jimmy and Jimmy could have been right to be furious with the two. He suggests that Jimmy might be right in thinking that Redfern is a remnant of an earlier version of England that no longer exists. He further states that both he as well as Alison tend to be neutral and do not take a stand regarding issues. Alison is shocked by this revelation from him. As she packs, she thinks about her next move. Helena arrives in the room, after which Alison decides to leave. She bids goodbye to Cliff.

Helena is left behind because she is scheduled to attend a meeting at work the next day. Alison along with Colonel Redfern go out which angered Cliff because Helena is disrupting their lives and departs just before Jimmy returns. Jimmy comes back a short time later, angry after he saw Alison departing alongside her father, on the return journey. Helena hands him a note that Alison had written to explain why she made the choice. Jimmy is furious at her calm, polite speech. Helena informs him that Alison will be giving birth to a baby. Jimmy says he’s not overjoyed by this news. He then scolds Helena by slapping her. This leads Jimmy to fall to the floor in desperation. After that, Helena “kisses him passionately,” and the scene ends.

The scene starts a few months later and looks like the opening of Act 1. The only difference is that it’s Helena who irons. Jimmy and Cliff laugh and talk about news articles. They fight and Cliff wears his shirt down. Helena goes to wash her clothes, and when she’s on the stage, Cliff tells Jimmy that the stage is empty. Jimmy thinks about why he prefers female friendship over male although he values Cliff’s company higher than Helena’s. Helena returns with her shirt and Cliff goes off to dry it in his bedroom. Helena informs Jimmy she loves him and he pleads with her to never let her go. Then Alison arrives on the doorstep, looking ill and dirty.

The next scene begins couple of minutes later, and features Jimmy making his flute outside of the the stage. Alison says to Helena she’s not mad at her and she isn’t trying to dissociate the newly-wed couple. Helena is, however, adamant Alison’s presence has reaffirmed to her that what she’s doing isn’t right. Alison also suffered miscarriage and Helena thinks that this is as a “judgment” on her relationship. Helena calls Jimmy back and informs her that she’s going to leave. Jimmy declares that he was always aware that Helena was not strong enough to handle genuine love, which requires “muscle and guts.” Helena goes away.

Alison apologizes she is sorry, and Jimmy states that she ought to have sent flowers to the mother of Hugh, and he recalls his first encounter with her. At the time, he believed she had an “wonderful relaxation of spirit.” It was a sign of being apathetic, he claims. Alison tears up and tells Jimmy that losing their child has forced her to understand the level of emotion she wanted to feel all these years. She tells him she would like to be “corrupt and futile,” and falls to her knees. Jimmy cannot bear to see her in this way, so he kneels down to assist her. After that, “with a kind of mocking, tender irony,” Jimmy begins to play their squirrel and bear imaginary game. “Poor squirrels,” he tells Alison then she says, “poor, poor, bears.”