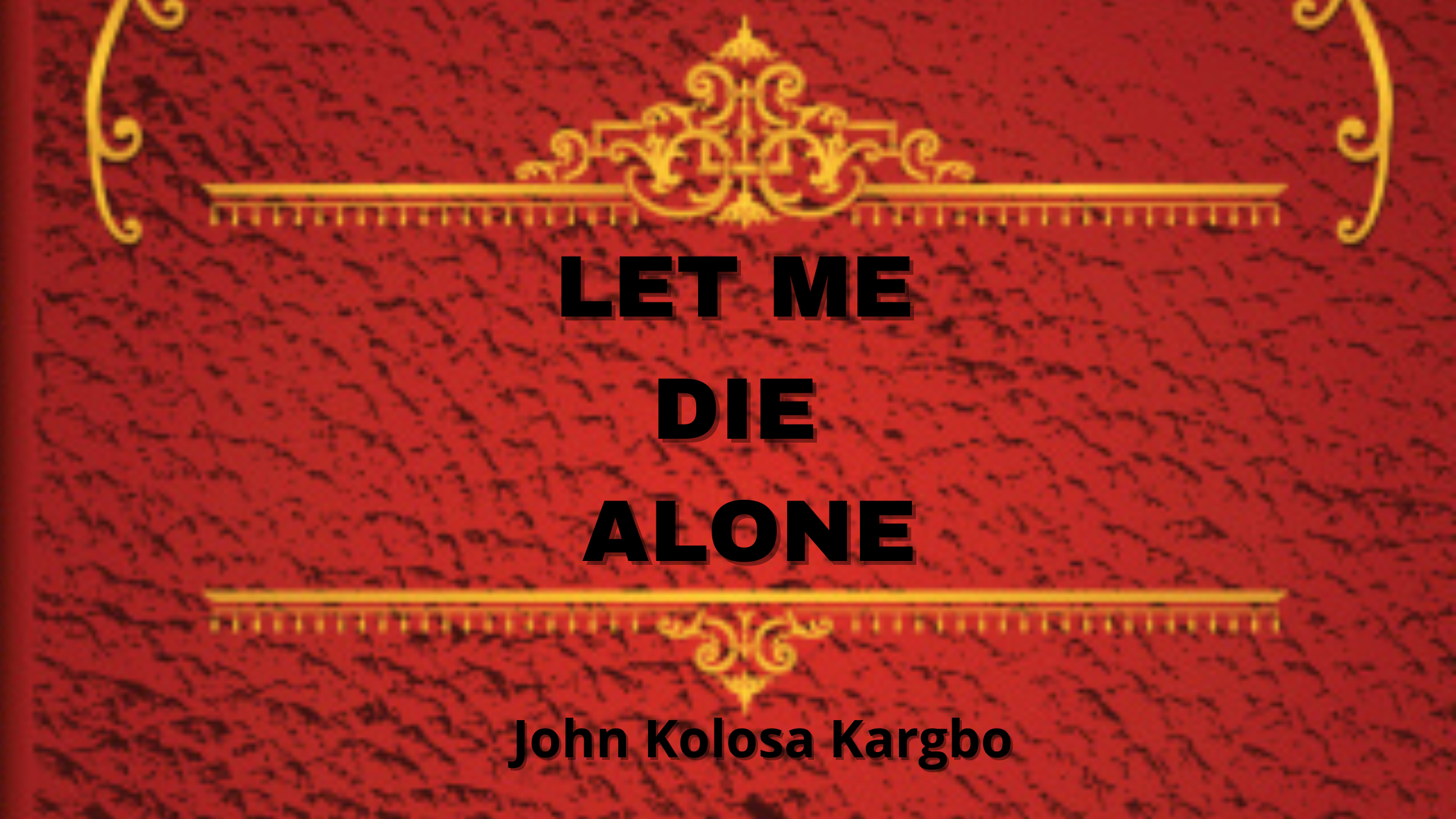 In this post, we will be giving you a comprehensive Plot Summary Of Let Me Die Alone by John Kolosa Kargbo.

John K. Kargbo, in his play “Let Me Die Alone”, summarizes the plethora of betrayal that exists in the common African social system. The play is set in the Senehun and Moyamba villages in the Mende Kingdom. The play exposes the sins and calamities that the lust for power and the deceit of those who trust you could cause on society. It looks at the evil that excessive greed for power can bring about.

Two of them, Musa and Lamboi, blinded by their uncontrollable desire for power (i.e., the chief’s throne), have betrayed two chiefs who have succeeded them. They also play a key role in the deaths of Gbanya and Jeneba and, in turn, the suicide loss of Yoko.

The play opens with a romantic scene between Gbanya, the chief of Senehun, and Yoko, who is his favorite of his wife’s thirty-seven wives. A guard interrupts their love by letting them know that the Governor of Senehun is headed to Senehun.

Gbanya is devastated by the planned arrival of the Governor and concerned about the thoughts that he had before now about his father coming home. In Africa, when a chief or king’s predecessor is summoned, it signifies that the incumbent can join his ancestors soon.

In the circumstances, Gbanya has the premonition that something terrible could happen to him very soon. Knowing that he sided with John Caulker against his brother, George Caulker, in an all-white war further reinforces the fears of his heart.

In the beginning, Yoko tries to dissuade him from engaging in these negative thoughts. In the end, when he’s not opposed to her suggestions, she reminds him of the pledge to leave the throne to her upon his death. Gbanya is adamantly opposed to this arrangement. He asserts the reality is the case that Mende Land is in a state of disorder and chaos. It requires a person to correct the wrongs.

We meet Musa and Lamboi next. They are likely to be members of Gbanya’s government. Lamboi is a man who would like to become the chief wants the cooperation of Musa to kill Gbanya. Initially, Musa refuses to oblige to Lamboi’s nefarious plans. Later, he agrees to assist if Lamboi threatens to expose his secret about human sacrifices.

The expected Colonial Governor, Dr. Rowe, visits Senehun. As was expected, he smacks Gbanya for defending a white brother over the other. Lamboi and Musa profit from their anger and poison Gbanya following the Governor’s departure.

With aplomb, Lamboi proclaims himself the new chief. But, skeptical Yoko, who believes that Gbanya has been murdered with the help of the two, object to the announcement. She takes on the role of a leader instead.

In the subsequent scenes, we witness an increase in Yoko’s power due to her service to the Governors and the expansion of her authority. There is a shift of her seat in the government between Senehun and Moyamba.

We also observe the infidelity between Jilo in love with Ndapi. Jilo is engaged in extra relationships with Lansana. Ndapi, who is the chief warrior, is depicted in the media as an alleged woman-beater or one who treats his wife badly. Jilo was later to seek comfort in her relationship with Lansana. Their sole daughter, Jeneba, an extremely sharp and intelligent young lady, is often at the palace.

Yoko, who has been able to use her powers for a long time, would like to swap to one of her companions. As the Poro female, Yoko is unable to conceive. She would prefer to be a mother rather than being a queen.

As this battle rages on, Musa and Lamboi do not let up their plot to take down Yoko and take over the kingdom. They are amazed at how Yoko has been able to manage the issues of the chiefdom and her skill in maintaining good relations with the Governor. They decide to execute Jeneba and then incite the population towards her (Yoko).

Ndapi, On the contrary, is caught by an unaware Jilo in one of her many escapades with Lansana. She is dragged back to her palace. Yoko calms Ndapi and promises to punish Jilo. Yoko then makes an official visit to the Governor’s residence.

Before she travels, Jeneba is kidnapped and taken by Musa and Lamboi to begin their sinister plan. Yoko requests a mount of a search team to find Jeneba’s missing.

While she’s away while they are away, their plan (Musa as well as Lamboi’s) is soon to be put into motion. They kill Jeneba and then enthrall people to believe that Yoko is the crime here. They inflict poison on the population’s minds and especially the local Sande ladies, Jilo, and most especially the father of the baby, Ndapi.

On her arrival, Yoko is called several unprintable names upon her arrival. She is called a “witch”, “murderer,” and many more. Yoko is confused by changes in the public’s attitude toward her. Her confusion increases when Ndapi is skeptical about her legitimacy.

After realizing that she’s been accused of burying Jeneba alive to keep her power and gain an undeserved favor from Governor and Governor, she denies having any role in Jeneba’s disappearance and pleads guilty.

Ndapi does not believe all of the above. Instead, he attributes her pity due to her inability to reproduce. The queen is fortunate, Jeneba, her body is found dead. Jeneba is discovered mutilated. Her heart and her private part separated.

Everyone is aware that Yoko is wrongly accused. Ndapi is the most notable. Ndapi attempts to take responsibility for the shame that he forced her through. Yoko declares that she will solve the problem down to the root of the issue in Poro Bush. Poro Bush.

Following a thorough investigation, she realizes that Lamboi, as well as Musa, are responsible for Jeneba’s demise. Ndapi is determined to pursue the two, but Yoko warns her of the consequences of their actions:

Their noses will decay, and cataracts will join their eyeballs. Leprosy will consume their fingers, and elephantiasis is bound onto their legs. This is Gbeni’s revenge. Yoko, Let Me die alone.

The messenger is introduced. He is on his way to deliver his message of the Governor to Yoko. Despite his huge vocabulary, it’s discovered his affiliation with the Poro society too. The Governor orders Yoko to give up the territory that she conquered. This is the final straw that breaks the back of the camel.

Yoko realizes that she is overcome by depression which is a condition that affects the brain. She takes poison in the midst of the pleadings of everyone.

In addition to, on the other hand, threatening Musa, Lamboi accuses Musa of creating a charm using elements of Yatta’s son as well as Mama Kadi’s child. Its name Lamboi asserts Musa created was Bofima.

“Let Me Die Alone” is also a study of human sacrifice as well as religious, occult practices that are prevalent in Africa. The theme is explored by the sacrificial acts that are performed by Musa in secret. Musa sacrifices the son of Yatta, Mama Kadi’s daughter, and later, Jeneba, for wealth and longevity.

The result of offending the Gbeni god (of Gbeni, the god of Poro the cult) can be ” cataract will marry the eyeballs; leprosy will rot the fingers, and elephantiasis will cling to the legs” of the perpetrator.

When she decides to accept the reign that belongs to Mendeland, Yoko can no ever again imagine. This is clearly the final cost of her pursuit for the throne as well as her entry to the Poro cult.