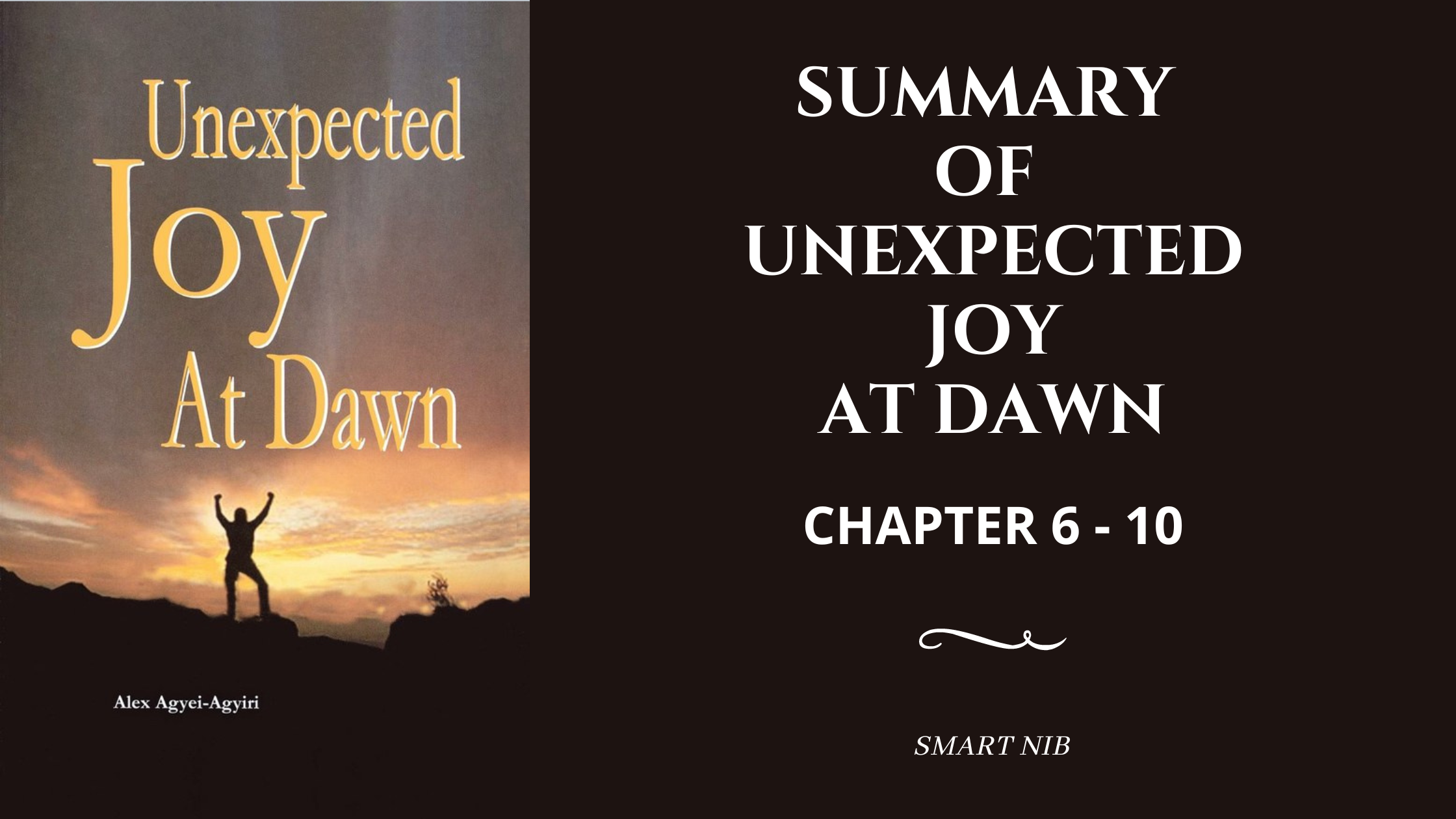 The chapters One up to Five from Part One We have met some of the main characters: Mama Orojo, Nii Tackie, Massa, Ibuk, and Tom Monday. The plot of the story obviously revolves around Mama Orojo and Nii Tackie.

While Nii Tackie is attempting to bring Massa to a healthy state, Mama Orojo feels the absence of her long-forgotten brother. Nii Tackie is busy with multiple jobs to keep a roof over her head and Mama Orojo is doing well in her work. Tom Monday, on his part, is keen on Mama Orojo and it appears that he’d do anything to win her love.

This chapter reveals the depravity of Ghanaian society is revealed through the physical devastation shown by the rubble from Kantamanto marketplace and the filthy lagoon. We can see through the lens of Nii Tackie the stark contrast between Ghana in the past and the present.

Nii Tackie walks through his streets in Accra when he spots Aaron. He shouts to Aaron, but Aaron is far beyond his hearing. Nii Tackie declares his admiration for Aaron since he has been an inventor. He believes that “every inventor was a great man”.

The reader is informed of Kantamanto market, which is no longer in use, and what it symbolized. The market that was closed used to be home to traders from diverse races and tribes across world borders.

Gao from Mali; Ibo and Yoruba (Anago) from Nigeria; Syrians and Lebanese all performed their trade activities on the market. Katamanto is the only African unity that Ghana is lacking.

The market was reduced to ruin due to the collective efforts, each in its own way from “an unexplained fire” and the military who saw the remains of “Kalabule” as shameful to people of Ghanaian society.

It’s a remnant of a time in the Ghanaian past in which there was no discrimination against foreigners and everyone could earn an income in the country with no fear or restriction.

Nii Tackie strolls to the foul Korle Lagoon. The lagoon is also a symbol of the rottenness that pervades Ghanaian society and everything that was wrong in Ghana at this time. In addition to the sour smell and the collected waste it also serves as the refuge or better the gathering place of young men who use marijuana.

Nii Tackie is seen squatting around the lagoon in order to defecate. A bit of an eye-sore that an assistant bank manager would admonish himself to and an unambiguous signal that things are not going well for the country’s financial situation. After he’s done and he comes across the remains of a dead woman and rushes away.

Massa is shaking as Nii Tackie arrives. While she’s suffering from severe pain she plays it down as if it was nothing.

The author depicts Massa as strong and resilient despite her health. Massa is able to divert the conversation away from her illness to the mosquitoes and the rats that are bothering her.

Nii Tackie, and Massa sleep. Nii Tackie had an entire night of sleep for an extremely long time because of Massa’s serious health.

Some days, his entire night’s sleep lasted only a few minutes; the rest of the time he watched over his ailing lover. (Page 36)

Massa is attentive enough to recognize Nii Tackie has had nightmares of this kind. It’s clear that the issue of alienation is taking its toll on Nii Tackie.

Let me now paint the scene.

Nii Tackie was born in Ghana and raised in Ghana. He has a Ghanaian name and is primarily of Ga origin. He’s lived all the time in Ghana. He is just like any other Ghanaian but what separates him from other Ghanaians is his distinctive tribal traces. There is nothing that can alter that, and that includes his Ghanaian style of speech and mannerisms. Everybody, including his colleagues at work, views the man as an outsider due to this. The perception is further strengthened when Nigeria is beginning its Ghanaian-targeted alien expulsion. As the only Nigerian living in Ghana, the Nigerian has plenty of reason to be concerned.

Only Massa, who is a firm Pan-African believes in Nii Tackie in a different light. She believes that, as Africans, “where one finds peace, there is one’s home also”. She smothers Nii Tackie’s worries.

Mama Orojo plans to travel to Ghana. She is preparing in advance for her trip. She plans to bring presents to her brother as well as “the old landlord and surrogate father of her brother”.

The author informs readers about Mama’s business empire and how Mama has a close relationship with Nigerian political leaders and how this has helped her get contracts. Her company is called the ‘Mama Santi Company’.

She is the first woman to construct a home in Ijase. The company she runs is accountable for the building “more than half of the houses there too”. The author also suggests that Ijase is the target of criminals.

Mama Orojo creates a hollow inside her Bible cover using a knife. She then hides six hundred naira (in the denomination of twenty naira) inside and seals it using glue.

Mama Orojo’s tenants come to visit: Idem (a provision store owner) and her husband Wachuc (a shift worker at the printing company). Idem is first seen saying “Omo Ghana no go-go” when two workers in dirty clothes speak flawless English for her. This is a reminder of the fact that Ghanaians are the most impacted by the law against alienation. Idem is also concerned about how the recent law that restricted non-citizens from the country will affect her business as most of her customers are non-citizens.

Mama is contemplating her forthcoming trip to Ghana. She remembers when she was forced to leave Ghana in accordance with the indigenization policy. She also recalls how she began her own business selling second-hand clothing. She was named by her dad’s father Mama as well as her other names were Olu Orojo.

Participants from Corpus Kristi (a seven-member policy-making body that is part of Amen Kristi) meet at her home for a discussion regarding their next mission as well as the cost of running. Mama Orojo is the treasurer of the local church which makes her an active part of Corpus Kristi. The only non-member at the meeting was Ibuk who, in a sense serves as a replacement for the deceased seventh member.

The setting is changed to a construction site operated by the Mama Sansi Group of Companies. Mama Orojo, the director is on-site prior to when she departs to go to Ghana.

We are starting to observe the effects of the law of immigration, in the form of a shortage of labour force. The conversations that take place between workers indicate that there is a shortage of food in Ghana and this isn’t too far from reality.

This chapter is a shuffle from Ghana as well as Nigeria. In the beginning, in Ghana, Linda asks Nii Tackie to drop by her home to have treats, while Nii Tackie tells him he’ll be thinking about her request.

In Nigeria Around 10.30 am, Mama Orojo encounters delays on her way to the airport. The first thing to notice is the traffic congestion caused by two angry drivers. Then, her car develops a fault. Her flight is scheduled to depart at 10.45 am. She will need to use a taxi to get to the flight that is scheduled.

In looking through bags at the border, the customs official is amazed that she doesn’t have “excess money, foreign money, contraband goods”. The only things she’s got are “a few clothes, tinned food, and a bible”.

He starts to think about what she will do to survive in Ghana. We learn from him about newspaper reports on the widespread sexual abuse by Nigerians throughout Ghana. He also advises Mama Orojo to be careful when traveling to Ghana. In irony, the amount that is sealed in Mama Orojo’s Bible cover is six hundred naira.

The action then shifts to Ghana. Nii Tackie is able to calculate his obligation. The bank with which he is working for a total of a thousand cedis. He’s banking using his leave pay and an additional six hundred dollars (from the part-time teaching position) to pay Massa for the Faith healer and his own survival while on leave.

Linda recalls her request, and she adds that she would not have invited him if it was not something special. Nii tackie attempts to convince her that there’s nothing more to him other than his name when Linda calls him “Assistant Bank Manager Nii Tackie”. But, Linda does not seem to comprehend.

Nii Tackie is then able to meet with prospective loan applicants.

Mama Orojo is aboard flight HT954. The flight is a stormy one and she’s not at ease. She is afraid that the plane will be crashing. A fellow passenger engages in a chat with her.

The unknown man (we will meet him several times throughout the story) is the one who picks Mama Orojo’s curiosity in gold. He takes out the gold ring. Mama is intrigued by the gold industry and the idea of trading gold.

“I love gold items,’ she admitted.

The man offers to buy the gold band for 2500 cedis. Mama is thrilled by the deal.

Mama Orojo, when asked to confirm that she’s returning to Ghana after 15 years since she left the country. She was 18 the year she left Ghana. She is approximately thirty-three years old.

Mama wants the man’s assistance in determining the best place to exchange naira to cedis. Mama Orojo acknowledges Ghana as her second home when the plane is descending.