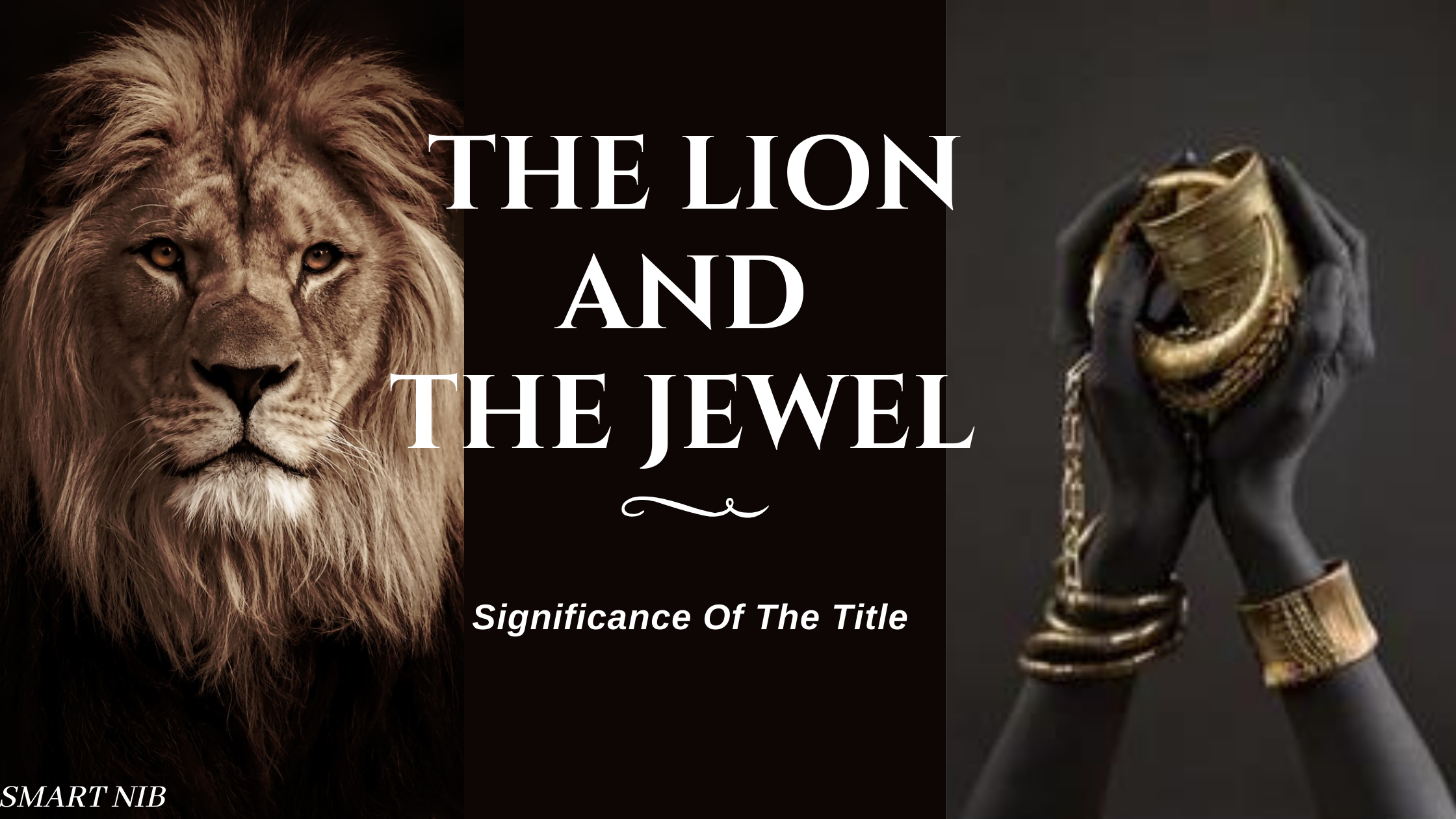 The title of a play or any other artwork or text is a description of the work that is typically determined by the writer. The title is significant as it is used to identify the work, place it in its the context of its creation, to provide the most basic information about the content, and to stimulate the reader’s interest.

The title The Lion and The Jewel plays a significant role in conveying the message or central idea of the play.

In illustrating the significance of the title “The Lion and the Jewel”,there are two concepts to consider; one “the lion” and the other “the jewel”.

A lion, hunting alone has a ratio of around 17- 19% when taking prey. However, it has amazing hunting skills that can be seen in Baroka. Although some women aren’t victim to Baroka’s desire to have them as wife or concubine, Baroka has managed to claim many of them and the latest one is Sidi. Lakunle is jealous of Baroka because Baroka has an impressive number of women living in his palace as wives or concubines.

A lion exudes the impression of authority through its magnificent walk and in the way it holds its head. This is what earns it the title of royalty or the king of the jungle. Another trait that has earned this wild cat its name is its mane, which is the symbol for a crown along with its powerful roar. Its roar, which can be heard for 15 miles, triggers animals to run for their security and serves as a method to alert their pride at its approaching.

In the drama, Baroka exudes authority as the head of Ilujinle village the position he was handed down from his father, who was a part of the patriarchal system within the village. Baroka is always supported by a wrestler, who serves as his bodyguard, a symbol of his status within the village.

The young people, which includes Sidi who is dancing the dance of the Lost Traveller, halt their game and sit down or make a postulation when they spot Baroka. Lakunle after seeing Baroka attempts to leave slowly but returns when Baroka appears. Bale and the younger ones are able to call him “Mista Lakunle.” He bows as well before the chief.

Another characteristic of a lion as demonstrated by Baroka is the strength of its body, both physically as well as sexually. Baroka’s muscular physique comes to light when he questions Sadiku about what made Sidi believe that he’s an old man and she’s not willing to accept him as his wife. He asks her

“Did I not at the festival of Rain, defeat the men in the long-tossing match? Do I not still with the most fearless ones hunt the leopard and the boa at night and save the farmers’ goats from further harm ?… Do any of my wives report a failing in my manliness? The strength of them all still wearies long before the lion does!”

Off to the Jewel!

Is an ornament worn around a woman’s neck in order to complement their beauty. In the play, Sidi can be described as a “very” gorgeous young lady.

Her beauty becomes famous when her pictures appear in a magazine based in Lagos that features her on the cover and on the middle pages. She asks her acquaintances if they’ve read the magazine that will show her beautiful features all over the globe.

“…Did you ever see the book? Was he the book that bestowed on me the beauty that is beyond the desires that a woman could have? it was so, he claimed. The book will reveal that beauty to all the people of the world. “

Baroka is jealous of Sidi due to the growing popularity of her stunning beauty. The fact that his image is small and is shown “in a little corner somewhere in the book, and even that corner he shares with one of the village latrines,” makes the Bale more jealous and determined for Sidi as his eldest wife. The First Girl tells Sidi,

“The Bale is jealous, but he pretends to be proud of you. And when this man (referring to the Stranger) tells him how famous you are in the capital, he pretends to be pleased, saying how much honor and fame you have brought to the village.”

Finally, a gem is not a vibrant shape. Women in the pre-colonial period of Africa were viewed as more of a property rather than spouses in marriage. The difference between the two cultures of Lakunle and Baroka is obvious. Lakunle regards a woman as a companion, not as a possession. Similar to Baroka, he also has a low view of women.

Contrarily, Baroka chases after young women who he can call his wives or concubines for the sake of satisfying his sexual desires, as well as the satisfaction he’ll receive by them agreeing to his demands and wishes.