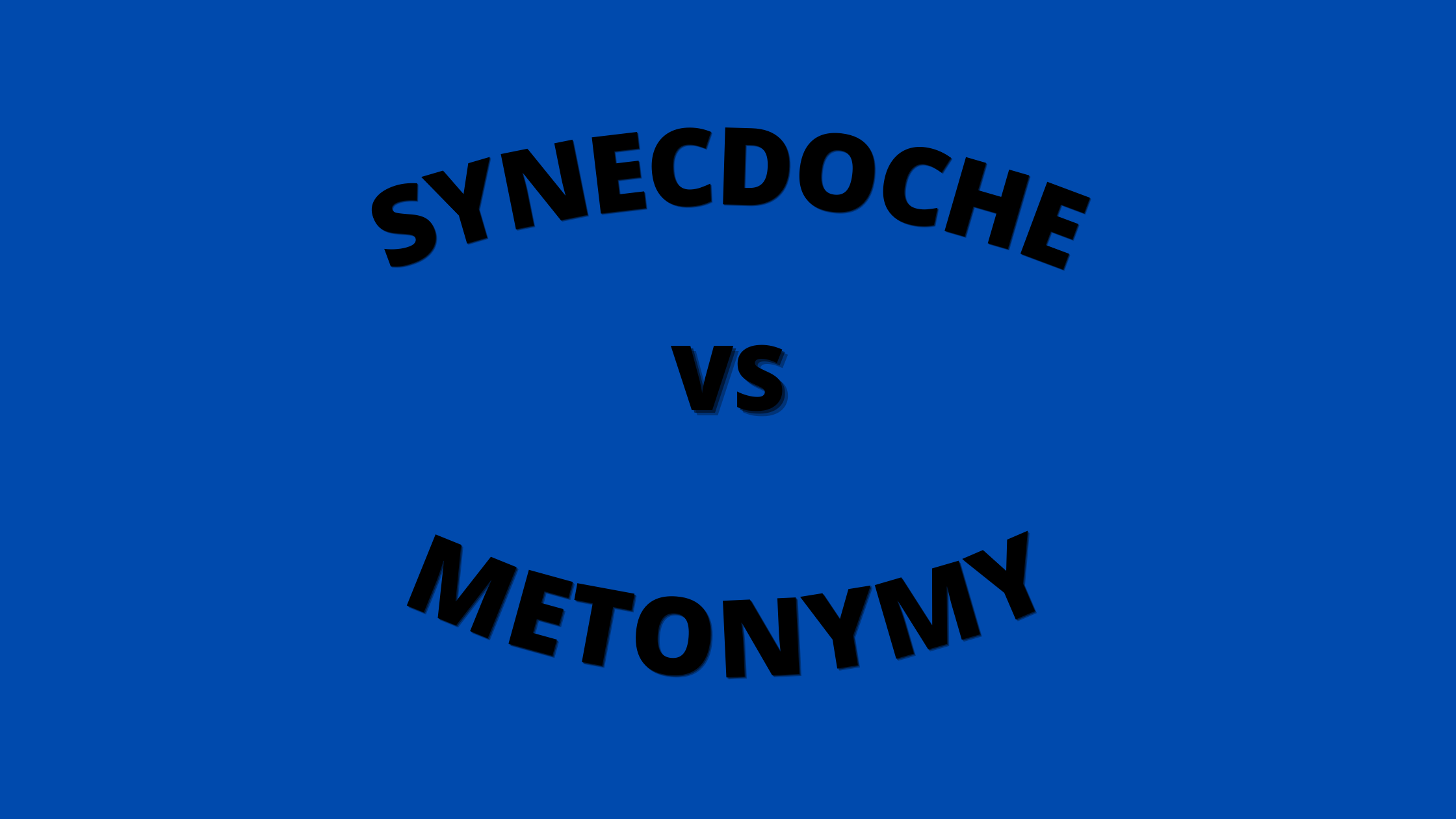 Synecdoche and metonymy, are both figures of speech. They were both parts of Ancient Greek rhetoric, and their names have been transferred from Latin into the English language.

The two concepts are extremely alike and, in some cases, overlap, causing lots of confusion. Additionally, there’s lots of conflicting information on the difference between Synecdoche and metonymy.

What are Examples of Metonymy and Synecdoche?

Before we begin listing the various examples of metonymy and Synecdoche, We will need to understand each of the figures of speech, i.e., Synecdoche and metonymy.

Crown – The king or queen

White House – the President of the U.S.A

Pen, as well as the sword, have replaced the notions of fighting and the written word in their respective meanings.

Below are a few examples of metonymy found in the literature.

(Ears can refer to the idea of paying attention or listening.)

When people use the term “crown” to refer to the power, duty, or the rule of the monarchy, they’re not actually talking about the item that is on their head, but they’re talking about what the object represents.

A good example of this could be:

It is the duty of the crown to promote unity in the community.

In this scenario, it is noticed that the “crown” refers to the obligation, influence, or power of the monarch and not the main object.

It’s also normal to describe news media and the journalists who write about it to the people who compile the data as ‘the media’. It’s a short form for ‘the printing press, which was once employed to create newspapers, the main source of information at the time.

Military officers are often called “brass” because it is an alloy that is used in the design of the form of buttons and insignias. Both are used to indicate the rank of military officers.

It is also extremely frequent to refer to the institutions that are part of the government as the places where the administration is managed.

It is the case in the United States, ‘Washington D.C. or simply “Washington,” are both used to refer to the government in general, and “the White House’ means the president as well as various other executive branches.

In the United Kingdom, ‘Buckingham’ is a reference to royals 10 Downing Street’ means the Staff of the Prime Minister, and ‘Westminster’ refers to Parliament. British Parliament.

Now to Synecdoche, it is when someone refers to an element or a component of something but does not really mean the entire item as well when they refer to the whole thing, but in reality, they are referring to just a portion.

A synecdoche is a figure of speech in which a word or phrase that refers to a specific part of a thing is utilized to denote the entire thing or reversely. In another way, a total is represented through a small part of it, or a portion of it is represented in the entire.

Let’s consider the term wheels as an illustration. If someone mentions ‘nice wheels’, you immediately know that he’s talking about the car and not only the wheels. Synecdoche can also include using the term the cattle head being headed as well as referring to helpers in the form of hands.

If someone is talking about their brand new car, they might use the phrase, “Check out my new wheels!” In this case, they don’t mean, “Hey, look at the new wheels that I got on my car,” they’re declaring, “Hey, look at my new car!”

If someone is talking about eating food at the table, they could be saying, “He worked hard to put bread on the table for his family.” This does not suggest that he worked to place only bread at the table. It is more about rather food generally.

At the Olympics, they declare it as they announced that the United States won a gold medal; however, what’s actually being said is that a certain U.S. team has won an Olympic gold medal.

The term “Pentagon” is a synecdoche when it is used to refer to a handful of people in the Pentagon.

Difference Between Metonymy and Synecdoche

Metonymy can be described as an expression of speech where something is given the use of a brand new name connected to the original idea or idea.

Synecdoche can be described as an expression of speech in which the word or phrase that refers only to a portion or a part of something can be used to denote the whole or reverse.

Metonymy is the same term or idea.

Synecdoche makes use of parts to represent the whole or reverse.

Synecdoche examples usually contain nouns that are common, such as body parts.

Aesthetics And The 3 Major Theories Of Aesthetics You Should Know

Similarities Between Synecdoche and Metonymy

Synecdoche and metonymy are so closely linked that some dictionary editors bestow the synecdoche definition on metonymy, for example, Wordweb. It’s even the Concise Oxford Dictionary of Literary Terms defines Synecdoche as “a kind of metonymy”. It is, however, our obligation as scholars of literature to discern between the two.

Are all synecdoche metonymy?

Certain people draw distinctions between Synecdoche and metonymy. The most frequent distinction can be that Synecdoche is used with reference to a portion of the item in question, while metonymy can be applied to things that are connected but not necessarily a part.

Is the White House a metonymy or Synecdoche?

It is believed that the White House is commonly cited as a metonymy to refer to the government of the U.S. executive branch government. It’s a type of metonym “where one thing contains another.”

Washington may also be used in this in a different way, using a wider structure to refer to U.S. government entities.

In conclusion, it’s difficult to distinguish between both terms. Therefore, be sure to determine what is used to refer to. If the term being used refers to a particular concept, then it’s a metonymy.

When the word is a component of the larger concept being referred to, the term is Synecdoche. In the reverse direction is that if a term is referring to a complete thing, but it’s intended to be an individual part, then it’s an esoteric synecdoche too.

One thought on “Synecdoche and Metonymy: Definitions, Examples, Differences and Similarities”