The Themes in Unexpected Joy At Dawn 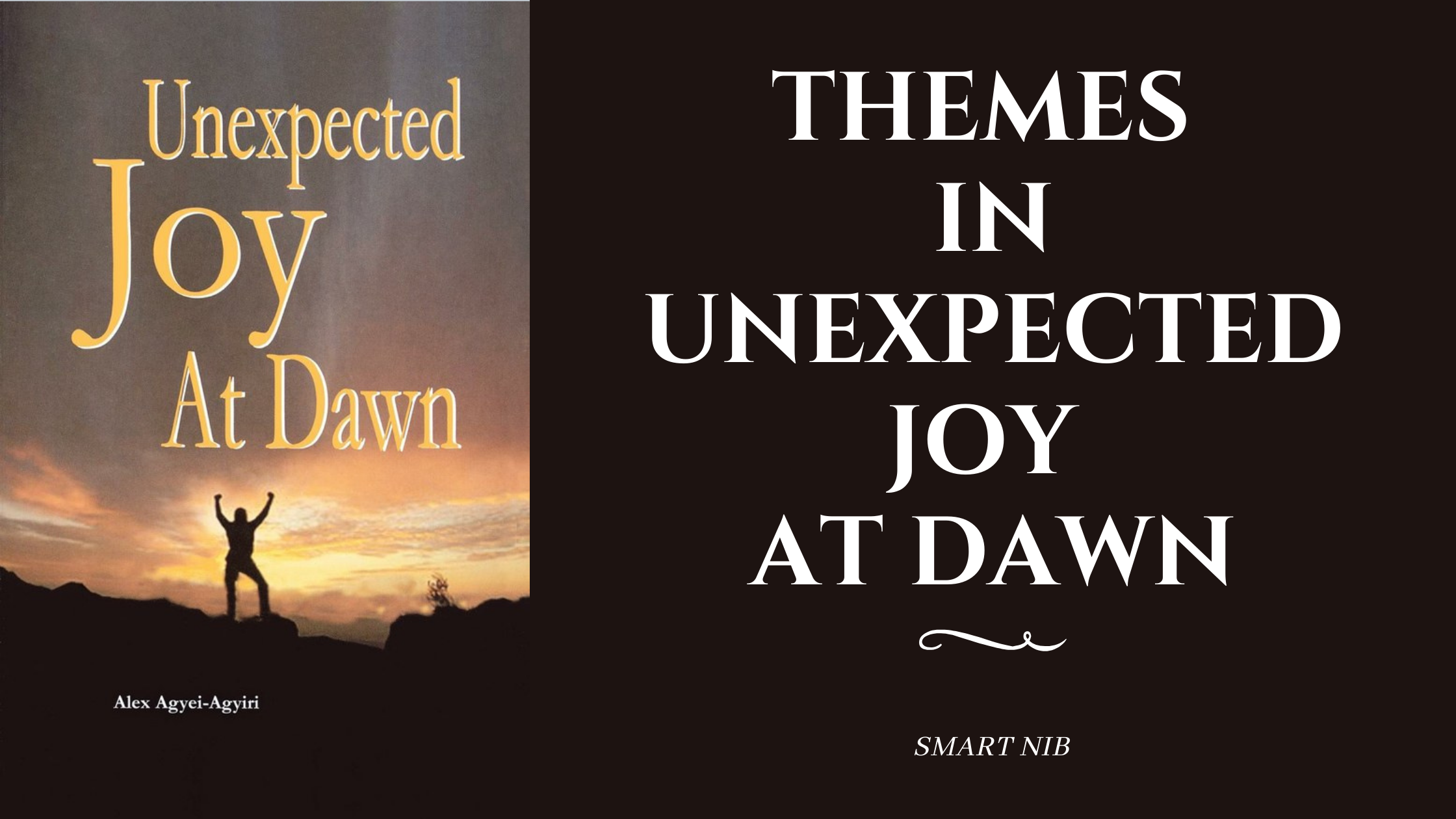 Other themes in Unexpected Joy at Dawn are insecurity, pan-Africanism, death, the re-union of ethnic groups, and prejudices. Let’s now look at every one of them.

Xenophobia is one of the major themes in Unexpected Joy at Dawn.

Oxford Advanced Learner’s Dictionary (8th Edition) defines the word xenophobia to mean “a strongly felt dislike or anxiety about people who are from different nations.

The text states that both the government and citizens in each of Nigeria and Ghana are not happy with the nationals of other countries in their respective countries. The Manager of the Bank at Expense Bank does not hide his disdain for Nii Tackie, whom he views as a Nigerian living on the riches of Ghana. He even goes as far as saying that if he had the authority, he’d be happy to dismiss all “aliens” working in the bank.

The bank manager’s wish, if not being fulfilled, is already being fulfilled outside of the bank. Ghanaians are already launching attacks on Nigerians who reside in Ghana. This is verified by news reports that claim to be stated by an immigration officer who was screening Mama Orojo’s bags at the airport while she was on her way to Accra, as well as by the sudden awareness of his tribe’s marks.

In Nigeria, there is a ban on the removal of foreigners from the country. Most of them are Ghanaians. The Ghanaians were doing extremely great in Nigeria before the policy of alienation was implemented. They are employed in schools, banks as well as construction companies. However, as soon as the new immigration policy is implemented, the Nigerian employers secretly take the permits of their residents and then destroy the permits.

The expression of Idem at the end of chapter 8. (Part 1.) from the chapter, “Omo Ghana no go oo,” highlights the attitude of a lot of Nigerian citizens towards Ghanaians who are illegal or legal immigrants.

Another theme that is prevalent in the novel is the theme of alienation. And it runs through two countries.

A few years prior, the Ghanaian government had introduced an alienation policy that eventually resulted in the massive exodus of foreign residents from Ghana and also the division of families. This resulted in the separation of Mama Olu Orojo and her parents from her younger brothers, Moses Nii Tackie.

About 15 years later, Nigeria introduced a similar policy that led to a tense atmosphere both in Nigeria as well as Ghana.

“Unexpected Joy” Dawn is based on the split of two siblings and the attempts of both sides to come together.

Nii Tackie’s family is separated due to his Ghanaian policies of alienation at a very young age.

It takes 15 years to reconnect with his sister Mama Orojo under the most unlikely of circumstances.

Additionally, Nii Tackie and Massa are separated due to Massa’s passing.

Nii Tackie, as well as Massa, are our perfect lovebirds in this story. They are so in love with each other that they both know each other’s feelings already.

When, for instance, Massa minimizes her hurt, Nii Tackie knows already that she’s lying and just wants him to feel relaxed. Massa is, too, despite the fact that her illness, is quick to recognize that Nii Tackie has become aware of his tribal markings.

Another type of love in the novel is Joe as well as Mama Orojo. Their love story is a contrast to the dog and cat relationship between the two nations. The relationship is restored with the same love and affection that the two countries do not share.

The bond between them can be so powerful the love is so strong that Mama Orojo is ready to give up her position as a respected member of her local Corpus Kristi and risk being removed from Amen Kristi to get married to Joe.

Idem and Wachuc are the second kinds of lovers. Idem’s constant nagging can witness a woman’s affection and concern for her husband.

The reader gets an insight into the problem of religious intolerance within the 2nd chapter (Part 1.) in the book. This is during Mama Orojo’s and Ibuk’s evangelistic campaign within Illere, Nigeria.

It is clear that the people they preach to tend are not interested due to the fact that the Sahm brotherhood is not a fan of preaching to their members and does not wish for any of their members to be involved in the sermons.

Tom Monday is also worried about his daughter’s extreme religious beliefs and intolerance, which is attributed to the fact that she was married to a member who is a member of the Sahm, the politico-religious brotherhood.

The ugliness of religion is at its highest during chapter 13. (Part 2) as members of the Amen Kristi Church have been engaged in the evangelical journey in Egba. The violence escalates.

In the previous chapter, chapter 19. (Part 1) The narrator in Chapter 19 (Part 1) has previously hinted at the violence he is threatening to commit; in a mild way, it was meant to “stop the Amen Kristi’s evangelical mission” by those who are concerned about the growing influence of Christianity.

The violence has cost the lives of Paleo’s wife Ibuk and others, inflicts wounds on numerous others, and also destroys valuable property. The perpetrators are those belonging to the Sahm Brotherhood.

Identity crisis is another important issue within the book.

But, he’s not considered a Ghanaian citizen due to the presence of his tribal markings. Therefore when it comes to Ghana, where he was born, as well as the country that he was born and his Mama’s “second home”, he is just like every other Nigerian or foreigner.

Nii Tackie moves to Nigeria in hopes that he will be accepted by Nigeria.

While his tribal marks indicate that he is of Nigerian nationality, his manner of speaking and accent, as well as the inability to communicate in or speak any Nigerian indigenous language, suggest he is mistaken as a Ghanaian. Instead of gaining acceptance and acceptance, he is treated as any other foreigner and subjected to modern slavery to keep him from being imprisoned.

The twist has to do with the fact Nii Tackie isn’t recognized as a citizen of any country. In Ghana, the country, he is perceived as a Nigerian. In Nigeria, the country, he is regarded as a Ghanaian. In normal conditions, it is true that he is an American citizen, Ghanaian by birth, and Nigerian through descent.

Insecurity is a problem throughout both countries.

We’ve investigated the religious attack on the Amen Kristi evangelical mission team that leads to the loss of a number of lives and property.

Another clue to the insecurity that exists within Nigeria. In the Ijase community, where Mama Orojo lives, there are a lot of robberies. Some people are killed when they are robbed of their property.

Chapter 15 (Part 2) narration gives us the strategy vigilantes employ to take on the robbery “suspect”. They put car tyres around suspects and burn them to the ground. This is a clear sign of lawlessness as well as the use of violence.

In the beginning page of this novel narrator depicts the subject of insecurity by showing bullets flying across Accra streets during a probable fight with a gang of criminals who are fighting each other over a few spoils or security officers taking down a gang of criminals.

Nii Tackie’s response to the incident and the repeated use to refer to it as “again”, it is clear that gang battles, police raids, and the general feeling of insecurity are now a regular occurrence in Ghana.

The narration lauds the virtues of Pan-Africanism by describing the debilitated Massa. She is not just an authentic Pan-African, but she also encourages people around her to shed their prejudices about their ethnicity or nationality.

This is shown in the way she looks at Nii Tackie’s plan to travel to Lagos and how she comforts Nii Tackie by using words as he is aware of his tribal mark and, consequently, his exile identity in Ghana.

Massa epitomizes pan-Africanism. In spite of all odds, she believes in the African shared brotherhood, the collectiveness, and holds to the idea that wherever (in Africa) where one can find peace is where one’s home.

In her words, she doesn’t think that ethnic divides are a problem. According to her, we are Africans prior to anything else.

It’s this light that her nation, Ghana, and Nigeria shut their eyes to.

The demise of Kantamanto Market, which used to be a place of convergence for people from different nationalities and ethnicities, signals the end of a Ghanaian society that embraces foreigners with welcoming arms. The rotting corpse in Korle Lagoon and the ailing Massa with a death-like aura over her also symbolize Ghana in its decline as a country that is suffering.

There are several deaths in the text.

To begin, we see the demise of Massa as well as the death of the fat lady at Makola marketplace; the suicide death of Marshak and the murder of Ibuk as well as a number of others who died in the Sahm-instigated violence against religion Tally O’s brutal killing in the mines; and finally, the murder of Aaron in the final chapter of the story.

Members of Corpus Kristi do not want Mama Orojo to marry Joe on the basis of unsubstantiated discrimination based on race.

They would prefer to have her wed Tom Monday, a Nigerian, rather than marry Joe, whom they consider to be who is a Ghanaian.

The chairman, who is speaking for the majority, suggests Mama Orojo’s deportation of the Corpus Kristi and a probable ex-communication from Amen Kristi if she gets married to Joe.

In the first paragraph of the text, Mama Orojo has been separated from her brother for around fifteen years when she was 18 years old.

Mama Orojo, now in her thirty-sixties, successful and accomplished, is looking to reunite with her twin brother.

As the story unfolds, she goes through Ghana to find her brother. While doing so, she’s enticed to the business of gold, and she and Joe begin to fall in love.

With the assistance of Joe with Joe, she tries to find Nii Tackie with the help of Joe. But, her search ends up at the end of her quest when she learns that Ni Tackie is gone to Nigeria. Mama Orojo returns to Nigeria with no hope.

Following the death of Massa, Nii Tackie travels to Nigeria in search of his sister. In Nigeria, Nii Tackie is trapped in the maze of Nigeria’s new law on immigration, as well as the huge city of Lagos.

But fate brings them together in spite of all odds at the dawn of the day.