THEMES IN LET ME DIE ALONE by John K. Kargbo 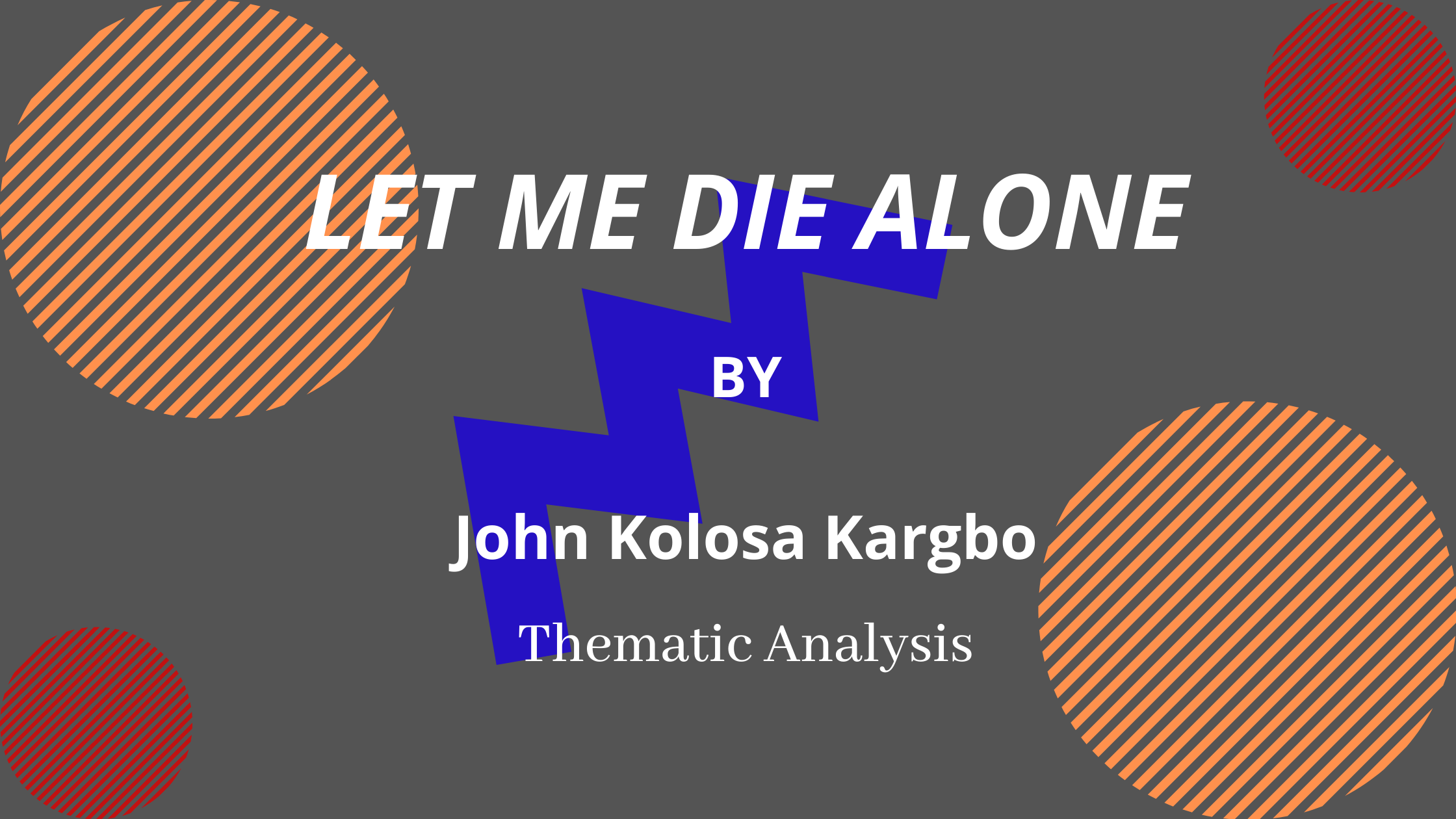 In this post, we will be discussing the THEMES IN LET ME DIE ALONE by John K. Kargbo. But first of all, we need to understand what a theme is.

A theme is a unifying idea that is a recurrent element in literary or artistic work. John K. Kargbo’s Let Me Die Alone is imbued with quite a number of salient themes.

The play explores the topical issues of colonialism, gender discrimination, betrayal, excessive desire for power, suicide, homicide, human sacrifice, and listless others. These issues further accentuate the artistic quality and social relevance of the play.

Discussed below are the themes in Let Me Die Alone by John K. Kargbo

This is probably the most prevalent theme of the play. It has a major impact on the plot development of the play. It is the case that both Lamboi and Musa betray the community and some notable characters. In search of the power of their respective families, Lamboi recruits the services of Musa the chief priest, to assist in his scheme to remove Gbanya forever from the reign, so as to prevent him from choosing Yoko as his successor.

Musa could have opted not to obey, but he did have some skeletons in the cupboard, things he wouldn’t wish for the public to know about. He has made human sacrifices frequently in exchange for wealth and longevity. He has lied about his position of honour with his apathy to human rituals all for the sake of pursuing the pleasures of life.

When the opportunity arises the duo betray Gbanya by claiming to free him of the shameful humiliation that Dr Rowe made him suffer. They poison Gbanya, and then Lamboi attempts to take over the reign. In the process, they deceive an innocent Gbanya who had placed his trust in them for his life and considered them to be their allies.

Another time, they betray Yoko, Gbanya’s successor. Instead of performing their priestly and advisory duties, Lamboi and Musa choose to deceive the people regarding Yoko. They murder Jeneba, then cut her up and then place her in a grave and later put her body into a grave. They then persuade the villager to think that Yoko has dug the poor body of the girl so that she can get favours from the colonial Governor. The betrayal and humiliation that follows greatly determine Yoko’s decision to commit suicide.

In short, Musa, as well as Lamboi, have betrayed Gbanya, Yoko and their public offices due to their desire for power.

The presence of the colonial governor, the messenger, and the white warriors and the sexist treatment shown to traditional rulers from the region reflect the colonial atmosphere that is a part of the play. The treatment given by Dr Rowe to Gbanya is very indicative of the air of immorality and self-proclaimed superiority that colonial officials displayed. In depriving Yoko of her newly acquired territory and territories, Dr Rowe also demonstrates how colonial authorities were able to take Africans as their own. It will be remembered that Yoko takes her time consulting with the governor before embarking on the conquest of new territories. She doesn’t go over the limit, but the governor removes her of her territories the same.

In the end, the ineffectiveness and the priggishness that is the hallmark of African traditional rulers have been exposed.

In Senehun and Mendeland generally women aren’t treated as equals to men. Women are seen as fragile, vulnerable, and ineffective at managing crisis situations. In the opening scene of the play, in the scene where Gbanya drags Yoko inside the chamber, he explains that he requires Yoko more than Sande girls. For him, women are under no obligation other than satisfying the sexual desires of men.

At first, Gbanya has promised Yoko she will be his successor. But, due to the turmoil around the kingdom, he is not ready to hand over the throne to her since women can’t manage a war-torn country. It’s the same position as Lamboi. The reason he gives as to why he wants to kill Gbanya is that Gbanya doesn’t want him to appoint Yoko to succeed him.

Evidently, without Yoko’s determination and persistence on her behalf, she wouldn’t be the leader of Mendeland. And talk of expanding the authority.

In Mendeland the majority of women are not allowed to join the Poro cult. Yoko has been the sole exception. In the village, there is a specific stigma that women are held to. Women are viewed as inferior, and, besides Yoko who is a fighter in the village, women are not given the top positions.

Characters in LET ME DIE ALONE by John Kolosa Kargbo

THEME OF EXCESSIVE DESIRE FOR POWER

Lamboi craves the chief’s throne and will take any step to be Mendeland’s chief. He has a plan to recruit Musa using the excuse that women should not have the power to govern them. In the hope of becoming the head of the community, he kills the chief and incites the murder of another.

In the end, killing Gbanya may not be the initial strategy, but there is no way to become King without the chief of the current administration and any opposition.

The two Musa as well as Lamboi murder chief Gbanya in a fatal way. They are also the murderers of Jeneba.

Musa, the chief priest, enjoys the practice of human sacrifice. He is often seen offering sacrifices of children to achieve prosperity, good health, and longevity. Lamboi is threatening him with this unsavoury secret of his and forces him to join his plot to murder Gbanya. The brutal death and mutilation of Jeneba reveal the gruesome nature of the human sacrifice within the narrative.

Infuriated and angry by her peers, Yoko becomes overcome by depression, “a disease of the mind”. The message of Dr Rowe will only add salt to her wounds. She decides to take her own life. She commits suicide despite the pleas of her trusted companions.