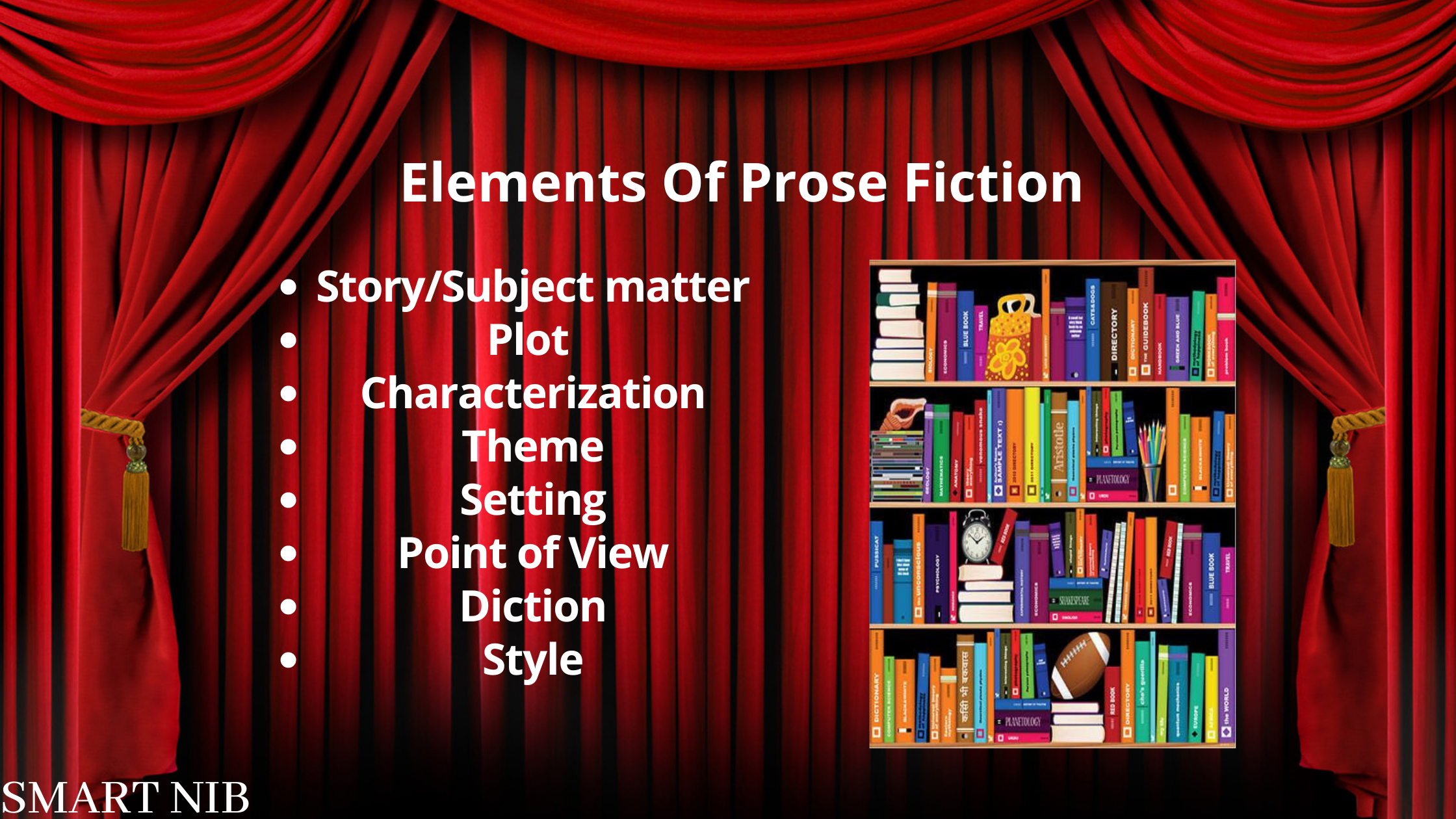 This article will discuss the elements of prose fiction; style of prose, forms of prose, and prose construction

The word’s origins can be traced back to the Latin phrase prosa oratio (which means “straight and unembellished speech“). Many people also make reference to the earlier expression pro versusm (or ” turned forward” when discussing the etymology for the term.

Prose is more typical since it is a language that is commonly used when writing or speaking. Prose is different from poetry in its method of construction. Whereas poetry is constructed using verses and stanzas, Prose is written using paragraphs and sentences.

It came into existence later than poetry, and its style is typically traceable to a specific writer or genre. It does not have a meter or rhythmic pattern that is the basis of the majority of kinds in poetry.

Newspaper articles, novels, short stories as well as encyclopedias, letter essays, editorials as well as journals, are just a few types that are prose. The many characteristics of prose are:

The content of Prose may be non-fictional, fictional, or heroic. Fictional Prose makes use of imaginative design and creative writing. Examples include parables novels, dramas, novels, or short stories. If the writing is based on facts, it is referred to as non-fictional prose.

Examples can include essays or biographies. Heroic Prose is based on stories from popular culture or folklore. It is a way to enhance the meaning of old expressions that are usually handed down via oral traditions. These are folk tales, lore, and myths.

In most cases, a single piece of writing can employ a variety of styles and types of content to increase the sense of making meaning for the audience.

The many different capabilities of non-fiction, fiction, and lore could result in an overall and healthy process of enjoying writing prose.

There are four main types of prose. They are descriptive, narrative, persuasive, and expository. The narrative style creates the story with characters. The story could be fictional or non-fiction.

It generally follows a specific timetable (not necessarily) and follows the order of the exposition, tension building, conclusion, action, climax. The expository form provides unadorned and fundamental information, similar to speeches and essays.

It attempts to describe a phenomenon, topic, or theme. They do not have great argumentative skills or storytelling skills. The descriptive form gives details on something similar to medical or scientific reports.

They do not have any narrative or argument. The five senses are used and build a deep understanding of the topic of choice. It is typically used in conjunction using narrative, persuasive and descriptive styles.

Persuasive form attempt to attract the reader with an argument to support an idea. It presents ample evidence to support the benefits or drawbacks of the decided point and then attempts to convince readers to agree with the argument. It is not a narrative as well.

The structure of Prose is typically dependent on a few elements, such as themes, characters setting, plot, viewpoint, and mood. These constructions can also be seen as the elements of prose fiction.

There are eight elements of prose fiction:

Every work of art under prose fiction must have a story that it tells or a subject matter that it revolves around, the kernel of the work that is presented to the reader to interpret or decipher. The story consists of those major events/incidents in the work which help in facilitating a concise summary of the work of art.

This is the series of events or incidents the author creates an entire story. The plot is not just the act itself and the way in which an author arranges the action towards a particular goal (structure).

The most important element of the plot is the Conflict: a conflict of thoughts, actions, ideas, will, or desires

People Vs. Person, Person vs. Environment Person Vs. Self.

Suspense is the quality of the story that causes readers to think “what’s going to happen next?”. In literary versions of fiction, suspense is more “why” than “what”.

It is usually created through two methods such as mystery (a unique sequence of events for which the reader longs to know the reason behind it) as well as a dilemma (a situation where a character has to select between two possible courses of action, neither of which is desirable.)

Character analysis is more difficult than describing the plot. Human nature is complex, ambiguous, and uncertain. It is much simpler to define what an individual did rather than what one is.

In commercial fiction, characters tend to be two-dimensional and serve as characters to help carry out the story. The protagonist should be easily recognized and fundamentally decent. If there are vices, they should be less ‘innocent’ type, which readers would not want to have.

Characters are presented in two ways: directly and indirectly.

Direct Presentation: The audience is shown straight from the start about the character’s traits. like.

Indirect Presentation: The author describes the character’s actions; the reader is able to determine what kind of person they are through the things they speak or do.

Dramatization Characters are shown talking and acting as characters in the drama.

Flat Characters– Usually contain one or two main features. The character can be summarised into a couple of sentences.

Round Characters: Complex and multifaceted, they possess the characteristics that are typical of human beings.

Static Character – A character that is exactly the same across.

1. Theme must be expressed by way of an expression that has the predicate and subject.

2. The subject should be described in a generalization of the world.

3. Be cautious do not make your generalization more expansive than it is in accordance with the specifics of the tale. Avoid words such as all, every time to be used in lieu of phrases like occasionally, some.

4. Theme is the primary and unifying idea of an entire story. It is the reason why it has the main elements of the story. It is not questioned by any particular detail in the narrative and does not be based on a preconceived notion of factual information.

5. There is no single method to describe the main idea of an account. If the requirements above are met, the claim is considered legitimate.

The setting of a story is the overall context of the location, time, and under what situation the action takes place.

Omniscient Point Of View: The story is told from the third-person perspective of a narrator with unlimited information about characters and events.

Third Person Limited Point Of View – The narrative is presented in the third person but from that of the character in the story. The POV is restricted to the perceptions of the character. It doesn’t reveal what the other characters are thinking or feeling or doing.

First Person Point Of View – The writer disappears into one of the characters. It is third-person restricted. Utilizes Pronouns “I” and “we”.

Second Person Point Of View: Uses”you” as a pronoun “you”. The word is rarely used.

The writer makes use of diction while passing his or her message in a work of art. This diction encompasses the words, phrases, and sentences that are strung together to make a cohesive and understandable whole.

Diction in a work of art may possess the quality of being formal, informal, figurative, or allusive. There are times when in the course of narration, the writer uses diction to establish differences between characters to highlight their social or economic status, their level of literacy as well as their personalities.

Style is the way the author utilizes words, sentences, uses non-literal phrases, and manages timing, rhythm, and tone. When asked to discuss the style, you will be asked to define or explain why sentences, words, and creative comparisons are efficient with regard to the content being written. *Dictionary is central to the style of an author. Includes:

a. Simple words – Everyday word selection. (“She suffered from illness for quite a lengthy period.)

2. Syntax- the arrangement of terms, including their order in grouping and their arrangement in clauses, phrases, and sentences.

3. Rhythm – The pattern of motion and flow that is created by the selection between words, and also the arrangement of sentences and phrases. It can be directly affected by the length of sentences, the structure of sentences. This includes the usage of pauses between sentences as well as the repetition used and how easy or difficult pronouncement of the word sounds used in sentences.

We have successfully discussed the elements of prose fiction; style of prose, forms of prose, and prose construction. Leave a comment below if there is any suggestion or any point we left out.